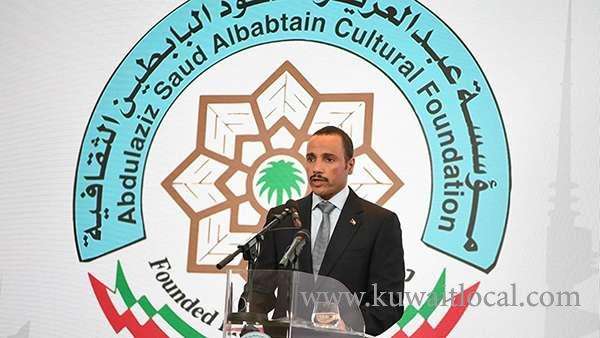 Al-Ghanim’s remarks were made during the World Forum for the Culture of Peace in the Netherlands on Thursday – organized by Kuwait’s Abdulaziz Saud Al-Babtain Cultural Foundation. His Highness the Amir Sheikh Sabah Al-Ahmad Al-Jaber Al-Sabah’s policy stands on avoiding war and conflict at all costs, as they violate human rights and destroy development in countries, he said.

Kuwait had seen the destruction a war could cause during the Iraqi Invasion, and does not wish for other countries to go through the same path, the speaker added. As part of Kuwait’s peace efforts, the country had hosted three international donors conferences for Syria and chaired the fourth held in London, he noted. Moreover, Kuwait hosted an international donors conference for Iraq and it also hosted the UN-mediated Yemeni peace talks for two months, Al-Ghanim said.

Resolve
Meanwhile, he affirmed Kuwait’s stance on reaching political solutions through peace talks to resolve the conflicts in Syria, Sudan, Yemen, Libya, Afghanistan and others, as well as to bring an end to the crisis between the GCC states. In the same context, speaker Al-Ghanim noted that His Highness the Amir had been calling for a political solution since the Syrian crisis broke out in 2011. He added that the world started calling for a peaceful solution in 2019 after long years of killing innocent civilians and spreading terrorism in the country. Al-Ghanim arrived in the Hague yesterday, accompanied by MPs Abdulwahab Al-Babtain and Omar Al-Tabtabai.

Meanwhile, the World Forum for the Culture of Peace kicked off Thursday with speakers calling for the promotion of culture and dialogue for global peace and security through education. George Vella, President of Malta, in his keynote address in the opening session stressed on the education for peace. Pointing to the conflicts in Yemen, Syria, Palestine and tensions between US and Iran, he said “we have to rediscover the maintenance of sustainable peace in the world. “Sustainable peace means identifying and eliminating the root causes of conflicts and physical violence,” he said. “We need to create communities and societies based on the culture of justice where every human being lives in peace and dignity,” said the Maltese President.

Value
He called for the promotion of education which is inclusive and recognizes the value of understanding and dialogue. Vella offered to host the Second such forum in Malta next year and which was gladly accepted by Abdulaziz Saud Al-Babtain President of the Foundation. Mrs Joke Brandt, Representative of the Dutch government and Secretary General of the Dutch foreign ministry, welcomed the state leaders, decision makers, scholars and cultural personalities from around the world who are taking part in the one-day international event. She underlined the importance of the venue of the Peace Palace in The Hague saying it is a Palace of historical significance in the city of peace. “We are justified in calling The Hague not only the city of peace and justice but also the city that stands for the protection of cultural heritage,” she stressed. Brandt noted that UNESCO plays an important role in the protection of world cultural heritage and warned that cultural heritage continues to be threatened by conflicts.

International cooperation is key to protect the cultural heritages and hence this conference here today is so important, she said. Prince Turki Al Faisal Al Saud of Saudi Arabia in his speech said that the central question is if there is a relation between culture and education and between peace and cultural heritage. He noted that Europe after centuries of war have found ways to cooperate peacefully.

The opening session was followed by the first session titled “Education and the Protection of Cultural heritage,” chaired by former Bosnian president, Haris Siljadzic who called for more conferences of this kind. “We want peace on one side and we have nuclear weapons on the other side. How to harmonize these paradoxes. And we have less and respect for each other. Education and correct upbringing are the solutions,” he said. That is why conferences like this play a big role to spread understanding and peace, he said. Secretary General of the Organization of Islamic Cooperation Yousef Al-Othaimeen said Islam respects all places of worship and called for cooperation with all international cultural organizations for protection of cultural heritage.

Fear
Leoluca Orlanda, Mayor of Palermo, said “we should not have fear of the other. This is the message.” “Palermo was a city of mafia but we promoted the culture of peace and today it is the fifth largest tourist destination in Italy,” he noted. Taieb Baccouche, Secretary General of the Arab Maghreb Union and ex-Tunisian foreign minister culture, said that heritage is part of human rights of an individual.

Peter Maurer, president of the international committee of the Red Crescent called on countries to respect cultural heritages during times of conflicts. The one-day international event has been organized by Kuwait’s Abdulaziz Saud Al-Babtain Cultural Foundation in partnership with the World Peace Foundation, New York, Leiden University in the Netherlands, the International Committee of the Red Cross and the Carnegie Foundation Peace Palace. Furthermore, the youth should embrace the culture of peace, said a Kuwaiti official here Thursday. Curricula has a major role in instilling such value in students; an inevitable outcome of His Highness the Amir of Kuwait Sheikh Sabah Al-Ahmad Al-Jaber Al-Sabah’s endeavor of deep-seating peace on a global scale, said Dr. Hamid Al-Azmi, minister of education and higher education.

His statement to KUNA came on the sideline of the World Forum for the Culture of Peace, which kicked off earlier today at the Peace Palace. The UN-bestowed title for His Highness as ‘Leader of Humanitarian Action’ is seen as an ongoing motivation for the youth in walking the path of peace and humanity, noted Al-Azmi, adding that developing curricula, as well as feeding them with values of peace and humanity, is a process done on a regular basis. The event organizer is Kuwait’s Abdulaziz Saud Al-Babtain Cultural Foundation, in partnership with the World Peace Foundation, Leiden University in Holland and the ICRC among others. In addition to Minister Al-Azmi, the Kuwaiti government is also represented by Minister of Information and Minister of State for Youth Affairs Mohammad Al-Jabri.