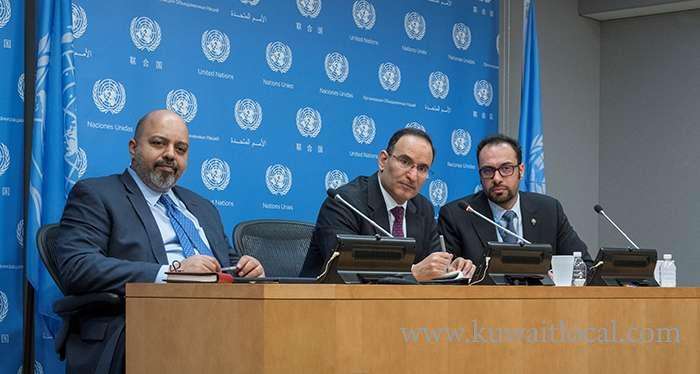 This came at a press conference held at the United Nations on Thursday on the occasion of Kuwait's presidency of the Security Council in February, where Ambassador Al-Otaibi reviewed the agenda of the Council and the top priorities of the foreign policy of Kuwait.

He pointed out that the Kuwaiti foreign policy continued during the past four decades with the same priorities, namely the Arab issues on top of which is the Palestinian issue, as well as its policies of preventive diplomacy and mediation.

Al-Otaibi pointed out that during the past decades, the State of Kuwait has made many moves in the Middle East and that during its presidency of the Security Council, it will focus on developing the Council's working mechanism to increase efficiency and transparency, improve the working methods of the Council and humanitarian issues.

Al-Otaibi stressed the importance of the Palestinian president's planned visit to the United Nations, which comes after a meeting of Arab foreign ministers and the Arab action to push forward the peace process to deal with Israeli violations of Jerusalem.

On the recent Security Council's visit to Washington to become acquainted with remnant of the rockets that were launched by the Houthis on Saudi Arabia which the US claimed they were Iranians, the Ambassador said the Security Council did not receive anything about this matter.

On Myanmar, Al-Otaibi said: "We tried and made an effort to arrange a visit to Myanmar during our presidency of the council, but the government of Myanmar did not reject in principle but the timing was not appropriate".

"If the brothers in Syria agree with each other, the official position of Kuwait is in favor of Security Council resolutions and the Geneva negotiations", he added.

On the forthcoming conference on Iraq reconstruction, the Kuwaiti Ambassador said "We expect the participation of more than 70 countries at a high level where preparations are being made in coordination with the governments of Kuwait, Iraq, the United Nations, the European Union and the World Bank to mobilize support for the reconstruction of the liberated areas."