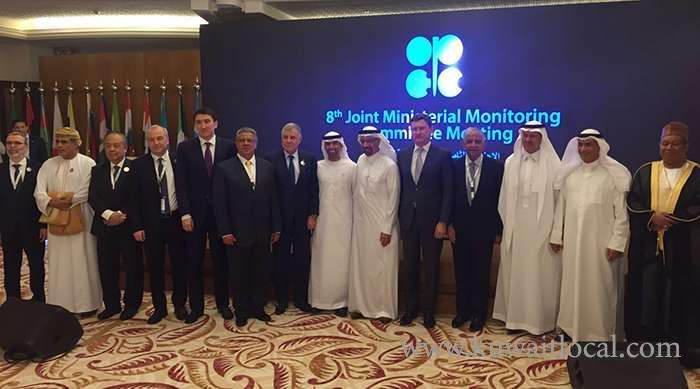 The State of Kuwait has been committed to cutting oil production so as to restore balance at global markets, Kuwaiti Minister of Oil, Electricity and Water Bakheet Al-Rashidi said on Friday.

The minister made the statement to KUNA after he had led Kuwait's delegation participating in the eighth meeting of the Joint OPEC-Non-OPEC Ministerial Monitoring Committee (JMMC) hosted by the Saudi city of Jeddah.

OPEC and non-OPEC oil producers' commitment to the output cut deal reached 145 percent, said the minister, adding that it has been the highest rate since the deal was put in effect in January 2017.

All countries taking part in the meeting have announced their continued abidance by working to restore balance at the global oil markets, he pointed out.

He commended efforts by OPEC and non-OPEC oil producers in making recovery at markets.

Meanwhile, the ministerial committee affirmed in its report that the level of commercial reserves of Organisation for Economic Co-operation and Development (OECD) countries dropped from 3.12 billion barrels in July 2017 to 2.83 billion barrels, representing a decrease of 300 million in surplus.

The report noted that the surplus in reserve is still exceeding accepted levels before 2014, the period which witnessed a drop in oil prices, it added.

The ministerial committee assigned OPEC to make a detailed study in order to reach different indicators to assess risks and situations at oil markets to make sure of achieving the purposeful goals of rebalance and recovery.

The committee also called for intensifying efforts by all countries to reach successful cooperation between OPEC and non-OPEC countries.

It discussed means of transforming the current cooperation into a mechanism which ensures continuously supporting and activating permanent cooperation of oil countries through a future joint declaration.