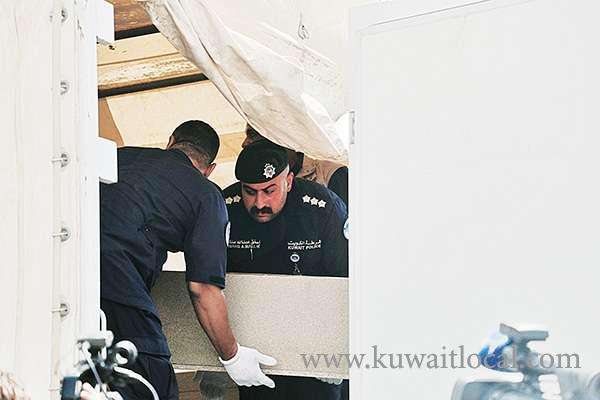 Handover of the human remains was organized at the Al-Abdali border checkpoint, with attendance of Kuwaiti and Iraqi officials.

Iraq had declared discovery of the corpses’ remains saying they belonged to Kuwaitis.

They are suspected to be of missing Kuwaitis and POWs, snatched and slain by personnel of the ousted Iraqi regime that invaded Kuwait on Aug 2, 1990, and occupied the Gulf State for seven months.

On July 24, Kuwait affirmed it would continue efforts to locate its Prisoners of War (POWs) and missing individuals in Iraq and will use all of its resources to achieve such goal.

In a press release commenting on the findings of the technical committee of the International Committee of the Red Cross’ (ICRC) Tripartite Commission, Assistant Foreign Minister for International Organization Nasser Al-Hain said that Kuwait presented data to the commission and the Iraqi team involved in the search for the remains of Kuwaitis in Iraq.

The step led to the approval of DNA testing on the human remains found in Iraq recently, said Al-Hain.

He added that initial results had shown a match in the DNA samples of some of the remains, which promoted the State of Kuwait to request that, all of the discovered bodies would be sent back to its soil for further analysis.

The tests will continue in Kuwait and the identities of the bodies will be revealed as soon as results are announced, indicated the official, adding that the families of the victims will be informed as the process goes on.

Al-Hain commended the tripartite commission and sub-committees for their efforts to uncover the fates of Kuwaiti POWs and missing persons and he thanked Iraqi authorities for efforts to facilitate procedures in finding the remains.

He hoped that the long-awaited case of the fate of Kuwaitis and individuals from other nationalities would be closed to conclude this humanitarian tragedy.

On June 20, the ICRC-affiliated Tripartite Commission announced the discovery of human remains in southern Iraq with initial expectations pointing to the discovery of bodies of Kuwaiti citizens and other nationals.

The discovery gave hope to the families of the missing individuals who were taken away over 28 years ago.

The commission gathers officials from Kuwait, Saudi Arabia, the US, the UK, France, and Iraq.

In 2005, the remains of a number of Kuwaiti citizens were discovered in Iraq, while in 2011, the body remnants of Iraqi individuals were uncovered. The tripartite commission continues efforts to uncover the remains of people missing or killed in the 1990-1991 war to liberate Kuwait.

Today’s handover of the human remains is follow-up to a previous declaration by a Kuwaiti laboratory about positive results after examining samples that had been brought from Baghdad, a Kuwaiti official indicated.

Rabie Al-Adsani, the head of the Kuwaiti delegation at the international tripartite commission and sub-committee tasked with the POWs file, said that in light of the positive results, Kuwait had addressed an official request to the Iraqi authorities to transfer the human remains to Kuwait to complete the examination at the Interior Ministry’s department of criminal evidences.

The Ministry of Interior department keeps a DNA database for the Kuwaiti POWs, thus it will conduct a test to determine whether the samples match, Al-Adsani has explained further.

Al-Adsani explained that the DNA extraction for examination is a very complex and time consuming process.

He expressed gratitude to the Iraqi authorities namely the ministry of defense, the ICRC, the UN mission, members of the technical committee from Saudi Arabia, the US, the UK and France for their cooperation and fruitful efforts that led “to these positive results”.

Kuwait Thursday highly appreciated efforts by Iraq, the ICRC and the Tripartite committee over progress made regarding fate of Kuwaiti missing persons.

This came in a phone call between Deputy Prime Minister and Foreign Minister Sheikh Sabah Khaled Al-Hamad Al-Sabah and Iraqi Foreign Minister Mohammad Al-Hakim after Kuwait received human remains earlier Thursday said to belong to Kuwaitis who had been missing or held as prisoners by former Iraqi regime.

Sheikh Sabah Al-Khaled, according to a statement by the foreign ministry, said he was looking forward for further positive results over this “important humane file.”

He reiterated keenness to continue cooperation with Iraq over this issue.

Residence Transfer Of Children To Mother Stopped The General Administration of Residency Affairs decided to stop transferring the residency of the children to their mothers in cases where the father has left the country permanently or his residence ... July 31, 2020 0 8069 Category: Kuwait

Kuwait Opens Airport. More Than 10,000 Tickets Cancelled As Kuwait opened its Airport for commercial operation today, according to reports, more than 10,000 tickets will be cancelled after the sudden decision to ban commercial aviation with 31 countries. ... August 01, 2020 0 8025 Category: Travel

Kuwait Bans Entry From 31 Countries Kuwait today expanded the list of countries, from which it is prohibited for people to enter Kuwait. As the Kuwait airport started commercial activities today, the Civil Aviation Authority announced t... August 01, 2020 0 5790 Category: Travel

India Signs Air Transport Bubble Agreement With Kuwait India and Kuwait have signed a transport bubble agreement which will enable air carriers to uplift stranded passengers both to and from India. However, since Kuwait has issued a temporary ban of re... July 31, 2020 0 5643 Category: Travel

Kuwait Approved PCR Testing Centres in India Testing for the coronavirus has been very much in the news. The first and most urgent focus is on increasing access to tests to diagnose people with current infections. Doctors use PCR test to diagnos... July 30, 2020 0 5306 Category: Coronavirus

List Of Travel Ban Countries May Change Continuously - Govt Spokesman The Kuwait Government spokesman Tariq Al-Muzaram said that there was no exception for those coming from any country to Kuwait from presenting the PCR certificate, which is mandatory according to healt... August 02, 2020 0 4939 Category: Kuwait

Expats From 7 Banned Countries Can Enter Kuwait If They Have Stayed In Other Permitted Country For 14 Days The Directorate General of Civil Aviation stated that residents from the seven declared countries (Bangladesh, the Philippines, India, Sri Lanka, Pakistan, Iran, Nepal) is not related to the citizensh... July 30, 2020 0 4794 Category: Expats

Expatriates Who Left Kuwait After September Can Now Return Expatriate residents who have left Kuwait after September 1, 2019 can re-enter Kuwait as per a circular issued by Kuwait’s Directorate General of Civil Aviation DGCA allowing passngers to be abl... August 01, 2020 0 4792 Category: Kuwait