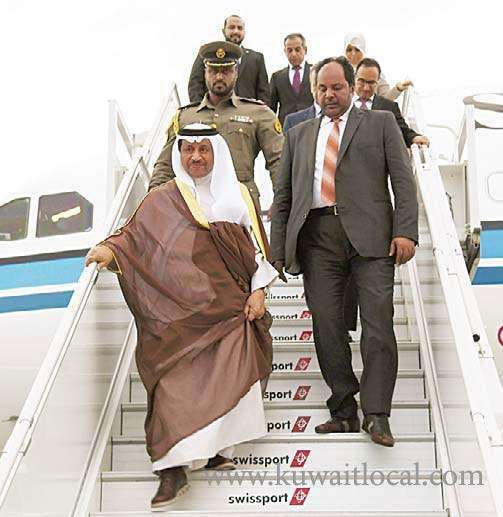 His Highness the Prime Minister Sheikh Jaber Al-Mubarak Al-Hamad Al-Sabah, the representative of His Highness the Amir Sheikh Sabah Al-Ahmad Al-Jaber Al-Sabah called on the international community to support the United Nations as “the only legal umbrella for peacekeeping in the world”.

This came in a statement made by His Highness the Premier Tuesday after his arrival in New York to attend the 73rd UN General Assembly. His Highness the Prime Minister also called on the international community to support the United Nation’s efforts in promoting development, combating terrorism and ending wars, political unrest and terrorist operations in the Middle East.

He stressed the importance of United Nation’s role in maintaining security and peace, supporting stability in the world and promoting living standards in various countries. He praised UN Secretary-General Antonio Guterres’ efforts and keenness to promote development in many countries.

His Highness the Prime Minister also stressed Kuwait’s keenness to strengthen cooperation with the United Nations and support all efforts exerted to achieve peace in the world, praising the effective cooperation between Kuwait and the international organization in dealing with various international crises.

“The State of Kuwait will continue its distinguished humanitarian role in dealing with disasters and crises facing some friendly countries.” he said, stressing that Kuwait will continue its support to the United Nations programs to assist the affl icted countries and provide assistance to the needy. He added Kuwait’s election as a non-permanent member of UN Security Council (UNSC) for the years 2018-2019 will strength its international standing, show its bright side, and will highlight the great humanitarian role played for many years.