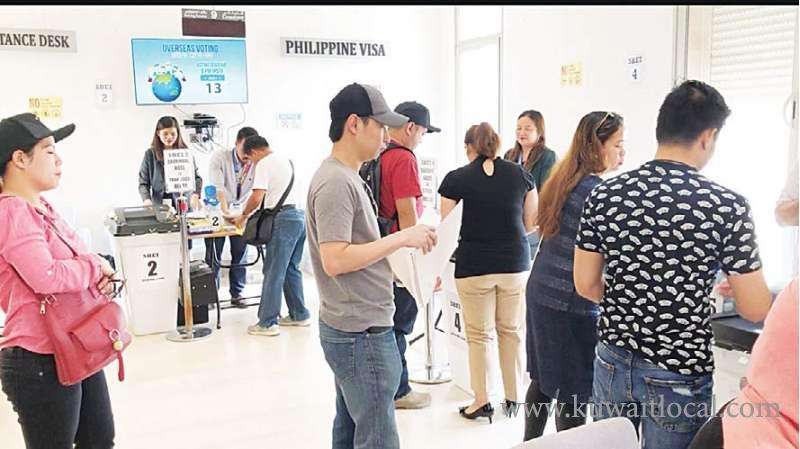 The Philippine Embassy in Kuwait announced that after almost a month since the Overseas Voting commenced last April 13, voter turnout in Kuwait has broken all records of the previous years. As of May 11, 2019, more than 13,500 Filipinos in Kuwait have gone out to vote at the embassy in the midterm national elections wherein they will select 12 senators and one party list representative.

With just two more days to go before the Overseas Voting ends on May 13 at 1:00 pm Kuwait time, the embassy is expecting to accommodate more voters. “We are very happy with the voters turnout although we fell short of our earlier expectation of at least 50 percent of the total number of registered voters in Kuwait but the mere fact that we have broken the record of over 12,000 in 2016 is more than enough. We would like to thank all our friends from the media as well as the Filipino community for helping the embassy in encouraging everyone to go out and vote,” stated Philippine Embassy Charge d’ Affaires Mohd Noordin Pendosina Lomondot.

Kuwait has 96,423 registered voters and ranks fifth among highest in the Middle East and Africa region. Dubai ranks first with 209,862 followed by Riyadh (169,401), Abu Dhabi (109,366) and Jeddah on the fourth spot with 103,349. “An undisputed successful overseas voter registration period, during which we surpassed the 22-month target by facilitating the registration of more than 96,000 Filipino voters, is a clear proof that our democracy has matured to the level in which the patriotism of Filipinos in Kuwait has awaken. This is evident in long lines at the Embassy premises during the ongoing voting period. Our kababayans have shown solidarity in having their voice despite being miles away to reshape the political landscape in the Philippines,” pointed out Lomondot.

The Embassy’s Commission on Elections (COMELEC)-deputized officers and staff continue to encourage the voters after casting their ballot to inform their relatives, friends, and loved ones to vote at the Embassy. “All over cyberspace via various social networking pages, the Embassy continues to carry DFA-OVS and COMELEC’s battle cry/slogan throughout this election period: ‘Let’s strengthen our democracy. It’s our right and duty. LET’S ALL VOTE’!” stated Luiz Carlos Osorio, Overseas Voting Spokesperson at the Philippine Embassy Meanwhile, Lomondot issued a public advisory informing all Filipinos in Kuwait that the embassy will be open for overseas voting on Sunday, May 12 from 8:00 am to 7:00 pm and on May 13 from 8:00 am to 1:00 pm.

The advisory further stated that the Consular Section of the Embassy will be closed on Monday, May 13 to give way to the influx of voters on the last day of the Overseas Voting. Regular Consular services will resume on Tuesday, May 14. “Once again, we are all calling on all Filipinos in Kuwait to please exercise your rights of suffrage. Go out and vote,” urged Lomondot

5 Year Residence For Expats And 10 Years For Expat Businessmen A new residency law will be introduced that underlines that an expat can acquire a residency visa for up to 5 years and for an expat businessman with a valid project, it is for 10 years. Among the ... August 12, 2020 2 6870 Category: Expats

After Days Of Waiting, First Flight Left To India From Kuwait Today After a long wait of more than three weeks, the flight to India resumed from Kuwait international airport today with the first flight carrying 322 Indians stranded here to Delhi. The flight, arrang... August 11, 2020 0 6102 Category: Kuwait

Allow Entry To Non-Kuwaitis From The 31 Banned Countries Who Are Related To A Kuwaiti The General Administration of Civil Aviation issued a circular to airlines operating at Kuwait International Airport allowing non-Kuwaiti passengers who have a relationship with a first-class Kuwaiti ... August 09, 2020 0 4595 Category: Travel

Steps To apply for Renewal of Kuwait Society Of Engineers (KSE) Membership And No Objection Certificate Online If you hold a engineer visa KSE membership is must and you have to renew it Every Year, Below we will explain the process about renewal KSE membership and applying NOC, this process is for who already... August 10, 2020 0 4499 Category: Kuwait Society of Engineers

Large Scale Expat Deportation Plan In Progress Planning is underway for the large scale arrest and deportation of around 126,000 expatriates living illegally in Kuwait, reports Al Jarida daily. They did not take advantage of the amnesty in April a... August 11, 2020 1 3459 Category: Expats

Only educated expats over 60 will have their residence renewed Public Authority for Manpower (PAM) has announced that expats at the age of 60 and above, without a university degree will need to make preparations to leave the country by end of this year. They are ... August 11, 2020 2 2902 Category: Expats
Related News
Visit Visa
Visit Visa
View All
Indemnity
Indemnity
View All
Dependent Visa
Dependent Visa
View All
Driving License
Driving License
View All
Project Visa
Project Visa
View All
Termination
Termination
View All
Civil ID
Civil ID
View All
Crime News
Crime News
View All