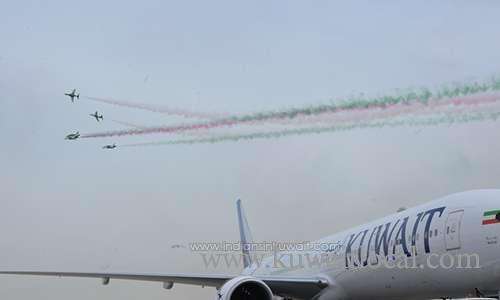 Under the auspices of His Highness the Amir Sheikh Sabah Al-Ahmad Al-Jaber Al-Sabah, Kuwait on Wednesday welcomed spectators from the Gulf region and beyond to its inaugural aviation spectacle.

Addressing the opening ceremony of the "Kuwait Aviation Show 2018," the chairman of the General Directorate of Civil Aviation Sheikh Salman Sabah Salem Al-Humoud Al-Sabah hailed the monumental event and thanked His Highness the Amir for his generous sponsorship.

He also conveyed his gratitude to the Deputy Minister of Amiri Diwan Affairs Sheikh Mohammad Al-Abdullah Al-Mubarak Al-Sabah, who attended the ceremony on behalf of His Highness the Amir.

Sheikh Salman spoke of his country's eagerness to develop its aviation sector, given the lucrative investment opportunities the industry offers, which includes bringing Kuwait's International Airport up to par with international standards.

On a raft of significant projects underway, he cited a new terminal currently under construction that would enable the airport to handle 25 million passengers yearly.

The Kuwaiti minister cited an International Civil Aviation Organization (ICAO) evaluation that found safety standards at Kuwait's airport to be at a whopping 78.18 percent, attributing the progress to the efforts of airport security personnel.

He added that the airshow is a step closer towards transforming Kuwait into an economic and financial hub, thanking the government for making the show a reality.