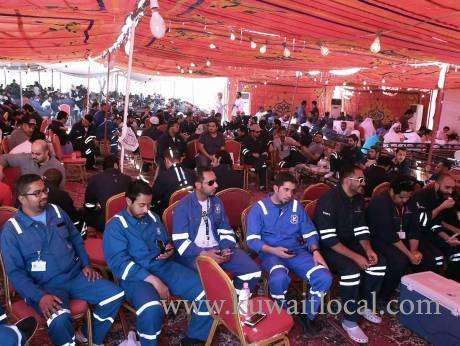 The Kuwait Oil Workers Union on Wednesday called off a "total strike" and decided to return to work, hours after a fresh appeal by the acting oil minister.

"In respect for the emir and in loyalty to him... we have decided to cancel the total strike," an official statement by the union said, ending action that had given support to oil prices.

The statement said workers would go back to work at 0400 GMT. "We trust the Amir... for the protection of the rights of oil workers," said the union statement, posted on its official Twitter account.

The decision came only hours after the union leaders told a press conference that they would continue their strike, having rejected all appeals.

The union leaders insisted that they would end the strike only after all their demands were met in full including the scrapping of plans to cut their wages and benefits.

The union said in the new statement that the strike was "extremely successful" and conveyed the workers' message to authorities about their rights.

It also warned oil authorities of taking any action toward the workers who stopped work.

The strike, which began on Sunday, slashed OPEC members' crude and natural gas production by more than half.

The workers' demands included abolishing decisions by authorities to cut some incentives in the face of falling oil prices and excluding the oil sector from a new payroll scheme for public servants.

"We cannot sit on the negotiations table while the strike was still going. Return to work and come for negotiations," Saleh told private Al Rai satellite television.

Saleh, who is also the finance minister, said that authorities have not yet implemented any decision regarding the oil workers' pay.

Oil prices ended a four-day losing streak Tuesday as sharply curtailed production in Kuwait due to the strike spurred hopes for an easing of the global crude glut.
US benchmark West Texas Intermediate for delivery in May jumped $1.30 (3.3 per cent) to $41.08 a barrel on the New York Mercantile Exchange.

In London, European benchmark Brent North Sea crude for June delivery finished at $44.03 a barrel, a gain of $1.12 (2.6 per cent) from Monday's settlement.

No Decisions Today On The Ban And Quarantine