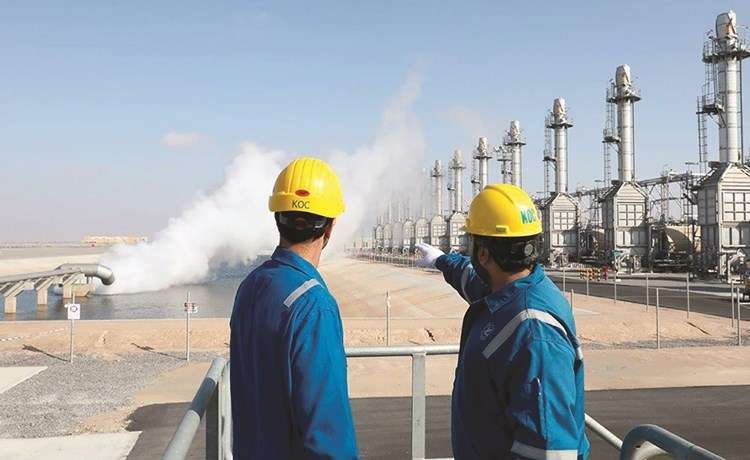 Official statistics issued by the Kuwait Oil Company shows the KOC has signed project contracts worth more than one billion dinars, equivalent to ($3.3 billion dollars), during the 8-month period from May 2021 until the end of December 2021.

These strategic projects has a direct impact on increasing production capacity over the next phase as Kuwait prepares to gradually increase its production to 3.2 million barrels per day in 2025, while also increasing the production of free gas to 950 million cubic feet per day, reports Al-Anba daily.

The statistics, a copy of which has been obtained by the daily, show the KOC awarded several contracts during the past year implementing a series of oil projects to enhance the production capacity of oil and gas. During the past year, the country witnessed the implementation of the Jurassic Gas Projects No. 4 and 5 to develop free gas production, as well as projects to clean up contaminated soil from the brutal Iraqi invasion.

As for the month of July, 15 contracts worth 369.54 million dinars were signed, seen as unique in terms of value of the contracts to clean the soil contaminated with oil as a result of the brutal Iraqi invasion. The company signed 5 contracts with local companies in cooperation with international companies for the North Kuwait project for drilling, transportation and processing, where the first site (zone 1) was awarded to the alliance of Khaled Ali Al-Kharafi and Brothers for Construction Contracting with Lamor Corporation for 58.2 million dinars; and the second site (zone 2) was awarded to the alliance of the Kuwait Factory Building and Contracting Company with the Environmental Technology Management Company worth 58.24 million dinars.

The sources stated the approval of awarding the South Kuwait project for drilling, transport and processing is as follows: Zone 1 to the Khaled Al-Kharafi and Brothers Company alliance worth 59.1 million dinars, and Zone 2 to the Heavy Engineering Industries and Shipbuilding Company worth 55.7 million dinars, and finally, the fifth site to Al-Sayer Construction Company, worth 75 million dinars.

This is in addition to signing a contract for a three-dimensional seismic survey for the Mutribah and West Kuwait regions, for a value of 41 million dinars. In August, the KOC signed 8 construction projects contracts worth 16.7 million dinars with a number of local and international companies, to implement a number of projects during the coming period.

In September, 12 contracts were signed worth 45.82 million dinars, the largest of which was worth 30.8 million dinars to provide nursing services to the Kuwait Oil Company Hospital in Ahmadi. Among the contracts signed was a contract worth 3.3 million dinars to carry out electrical maintenance in the hospital facilities.

In October, the KOC signed contracts for 14 projects worth 32.9 million dinars, and in the forefront of the contracts in terms of value, a contract was signed with the Ministry of Electricity and Water to deliver sea water from the Subbiya power plant and water distillation to the water treatment plant of the Kuwait Oil Company in Subbiya for a period of 60 months, starting from Dec 1, 2021 for a value of 5.96 million dinars in favor of the Ministry of Electricity and Water.

It is worth noting that the Kuwait Oil Company has succeeded in operating the heavy oil project and achieving the targeted production capacity of 60,000 barrels per day last September.