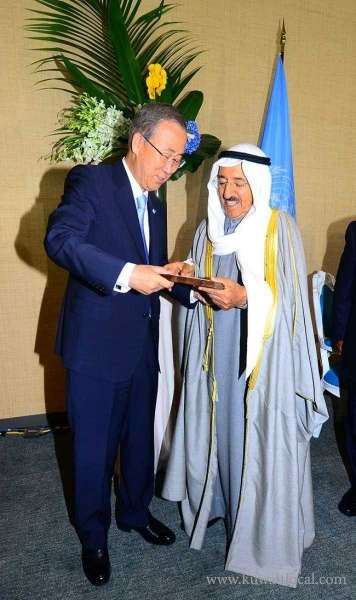 As the international community marks the United Nation's World Humanitarian Day on August 19, the State of Kuwait continues its efforts to be a key player within this domain.

In recent history, Kuwait had played an integral part in launching several humanitarian initiatives to make sure that the suffering and the pain felt by the disadvantaged and the needy worldwide would be lessened.

Since the ascension of His Highness the Amir Sheikh Sabah Al-Ahmad Al-Jaber Al-Sabah to the leadership of Kuwait in 2006, the GCC country launched various humanitarian initiatives, which led to a UN honoring of Kuwait as a humanitarian center in 2014.

His Highness Sheikh Sabah took part in the 2016 humanitarian summit in Istanbul. During the summit, the Kuwaiti leader highlighted his country's contributions to humanitarian causes around the world, noting that the State of Kuwait had offered over USD one billion in the last five years to support global humanitarian efforts.

Most of the allocated sums were delivered to the needy suffering from wars in Syria, Iraq, Palestine, and Yemen. On the regional level, Kuwait hosted three donors conference for Syria from 2013-15, donating USD 1.3 billion in the process.

The fourth conference for Syria, hosted in London, saw Kuwait also donating a sum of USD 300 million to help humanitarian efforts in Syria. Alongside government efforts, Kuwaiti charitable societies and relief aid organizations also took part in helping the Syrians to overcome their dire situation. In Yemen, Kuwait announced in 2015 a generous donation of USD 100 million for the Yemeni people suffering from the ills of civil war.

While on the level of the Palestinian cause, Kuwait always support the rights of the Palestinian people. In 2009, Kuwait donated USD 34 million to cover the expenses of operations carried out by the United Nations Relief and Works Agency for Palestine Refugees in the Near East (UNRWA).

The Gulf country also offered USD 15 million in 2013 to help the Palestinians and launched in 2014 a relief aid campaign for the Gaza Strip, which was hit by a brutal Israeli operations in July of that year. In Iraq, Kuwait continued to offer aid there, giving in 2015 a sum of USD 200 million to displaced Iraqis.

Kuwait pledged USD 176 million during an Iraqi aid conference held in Washington. On relief aid during times of natural disasters and disease, Kuwait offered thousands and millions of dollars to various countries, which were affected by the devastating forces of nature.

World Humanitarian Day is a time to recognize those who face danger and adversity in order to help others. The Kuwaiti humanitarian hand was extended to those who suffered from natural disasters in Japan, the Philippines, Turkey, Somalia, and other nations. In 2017, Kuwait did not slow down its humanitarian assistance to the region and the world.

The GCC country launched several humanitarian campaigns namely in Iraq where the government there was fighting the so-called Islamic State (IS) in Mosul.

While the Iraqi government and allies were winning the fight against the terror organization, Kuwait launched several campaigns providing relief aid and necessities to those fleeing from conflict zones. The day was designated by the UN General Assembly to coincide with the anniversary of the 2003 bombing of the United Nations headquarters in Baghdad, Iraq.