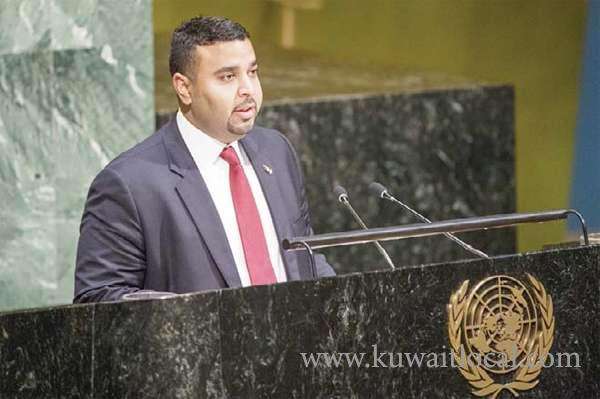 The State of Kuwait is keen achieving the UN Sustainable Development Goals (SDG) 2030 through aiding struggling nations and intensifying the role of women in global development plans, said Kuwaiti diplomats Tuesday. Speaking at a session on economic and sustainable development part of the 72nd UN General Assembly, member of the Kuwaiti diplomatic mission to the UN second secretary Abdullah Al-Sharrah affirmed that his country was keen aiding less fortunate nations to achieve the SDG.

Nationally, Kuwait, under the guidelines set by its leadership, had worked relentlessly to develop the country on various domains. The tenets of Kuwait 2035 vision is set to achieve what the SDG is calling for, stated Al-Sharrah. He indicated that turning Kuwait into a financial and economic hub would help the region to further develop, affirming that his country was eager to help other countries to march towards a bright global future. Al-Sharrah stressed that global coordination was necessary for the world to realize the SDG and indicated that without such cooperation, the world would not be able to achieve welfare for all people.

The Kuwaiti diplomat called on developed states to fulfill their commitments to the UN ambitious plans by providing 0.7 percent of their gross national income to this noble cause. On her part, Kuwaiti diplomatic attache Saba Al-Fuhaid said that her country was keen involving women in the SDG 2030.

Kuwait has always been on the forefront of allowing women to attain a leading role in their societies, affirmed the diplomat, adding that recent national statistics showed that there were around 161,000 women working public jobs. She indicated that enabling women to achieve their maximum potential was within the SDG 2030. Kuwait will continue its efforts to implement the UN development goals and will help other nations to reach similar feats, said Al- Fuhaid.