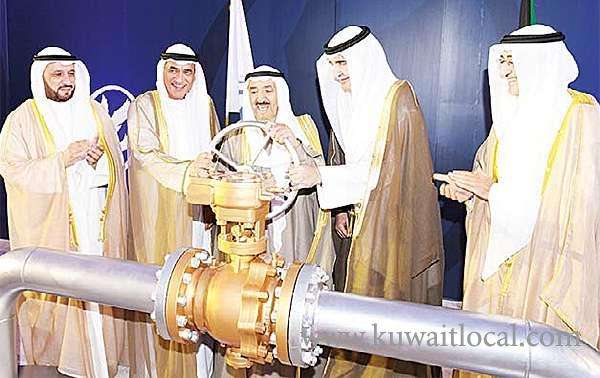 Under the auspices of His Highness the Amir Sheikh Sabah Al-Ahmad Al-Jaber Al-Sabah, Kuwait on Wednesday held a ceremony to inaugurate the Gulf state’s first shipment of light crude oil.

Upon his arrival at the ceremony, His Highness the Amir was warmly welcomed by Minister of Oil and Minister of Electricity and Water Bakheet Al-Rasheedi, along with senior officials in the oil sector. His Highness the Prime Minister Sheikh Jaber Mubarak Al-Hamad Al-Sabah and National Assembly Speaker Marzouq Al-Ghanim were also among the attendees.

Al-Rasheedi said that the oil sector has notched up another milestone achievement with the shipment of its first light crude oil cargo. Addressing His Highness the Amir Sheikh Sabah Al-Ahmad Al-Jaber Al-Sabah, Al-Rasheedi attributed the achievement to the efforts of the oil sector’s workforce. He hailed the export as a launchpad for greater oil production, which will serve to reinforce Kuwait’s position as an oil and gas powerhouse, fitting into national plans to build a stronger economy.

In his speech, Kuwait Oil Company’s CEO Jamal Jaafar said that developing the country’s Jurassic Reservoirs to help meet soaring domestic gas demand is among the company’s top priorities. Kuwait’s first shipment of light crude oil did not come without a struggle on the company’s part, he explained, saying that the workers in the oil sector were determined to bring their goals to fruition, helping drive the national economy to new heights. Kuwait stands at the cusp of a new era in oil and gas production, he said, wishing the country persistent growth and development.