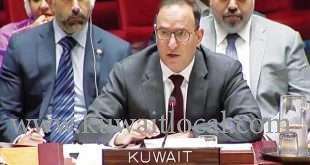 The State of Kuwait has submitted a draft resolution to the United Nation Security Council Friday calling to making arrangements to guarantee safety and protection of the Palestinian civilians in the occupied territories, including the Gaza Strip.

The draft resolution, of which KUNA has obtained a copy, the State of Kuwait condemns in the strongest terms the use of force by the Israeli occupying forces against Palestinian civilians in the Occupied Palestinian Territory, including East Jerusalem, and particularly in the Gaza Strip, in violation of international humanitarian law, international human rights law, and relevant resolutions, and expresses its sorrow at the loss of innocent lives.

It also calls for the “full lifting of the blockade and the restrictions imposed by Israel on the movement and access into and out of the Gaza Strip, including through the immediate, sustained and unconditional opening of the crossing points of the Gaza Strip for the fl ow of humanitarian aid, commercial goods and in accordance with international law.” Kuwait’s draft resolution requests the intensification of efforts by the UN Secretary-General and the United Nations Special Coordinator for the Middle East Peace Process to assist, in cooperation with concerned partners, in immediate efforts to de-escalate the situation and promote respect for international humanitarian law, international human rights law and the relevant UN resolutions, with a view to contributing to the deterrence of violence and to protection of the civilian population as well as towards an environment conducive to dialogue.

It also requests the Secretary-General to examine the present situation and to submit a written report, no later than 30 days from the adoption of the present resolution, containing his recommendations on ways and means for ensuring the safety, protection and well-being of the Palestinian civilian population under Israeli occupation