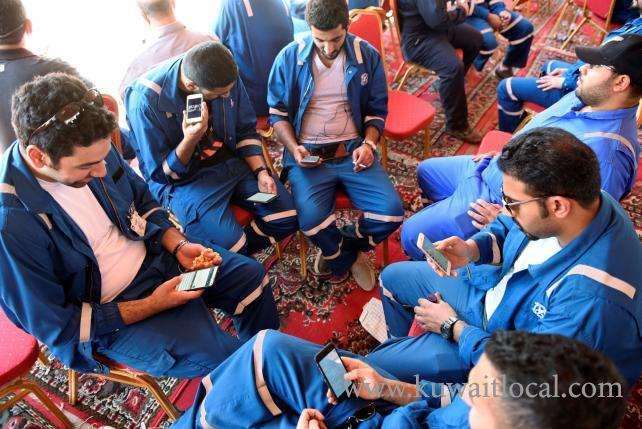 A 3 day strike by oil workers in Kuwait last month over pay reforms shows the government faces considerable opposition as it prepares to push through painful and controversial cuts to longstanding welfare benefits. Oil-exporting states around the Gulf are reducing subsidies for fuel, public utilities and food, and freezing or slowing the growth of public sector wages, as they try to curb big budget deficits caused by low oil prices.

Saudi Arabia, the United Arab Emirates, Qatar, Oman and Bahrain have all taken such steps in the past six months. But Kuwait has been slower to act; reforms were still being discussed in parliament last week and no timetable has been set. In mid-March, Finance Minister Anas al-Saleh said the cabinet had approved in principle a "repricing" of some commodities and public services, but he gave no details and did not mention a date for the changes. One reason for the delay is that Kuwait has more of a history of industrial action than the rest of the Gulf, where unions are banned or tightly controlled. In recent years, brief work stoppages over pay and conditions have also hit Kuwait's national airline and the customs administration.

More broadly, Kuwait's political environment is freer - in contrast to the other wealthy Gulf states, members of its rambunctious parliament routinely criticize government policy, and citizens are not shy about complaining on social media. In 2012, thousands of Kuwaitis demonstrated repeatedly against a new electoral law which they said disadvantaged the opposition. Such protests are almost unheard of in the other Gulf states.

The result is that Kuwait's government is having a harder time imposing austerity policies than its counterparts, and the extent of those policies is still uncertain. "The oil strike was a showdown between a welfare government and a civil society fearful that the government will solve its problem, resulting from a lack of planning, at its expense," said Shafeeq Ghabra, political science professor at Kuwait University.

"This strike shows that the government needs to have a major dialogue with civil society regarding economic as well political reform." Billions of dollars are at stake; finance ministry undersecretary Khalifa Hamada told the al-Qabas newspaper at the end of last year that "rationalizing" subsidies would save the government 2.6 billion dinars ($8.7 billion) over three years.

Savings would be greater if the bloated public payroll could be reformed. The finance ministry projected in January that the government would run a budget deficit of 12.2 billion dinars in the fiscal year starting on April 1, 2016, after state contributions to the sovereign wealth fund.

Between 7,000 and 13,000 of around 18,000 Kuwaiti nationals in the oil sector took part in the strike in late April, union members estimated. Union membership is not compulsory and foreign workers are not permitted to strike.

Workers were protesting a proposed overhaul of the public sector payroll system that would set uniform standards for salaries, bonuses and benefits. The Oil and Petrochemical Industries Workers Confederation fears the government will use the reform to freeze salaries of higher-paid employees.

Kuwait's oil output fell as low as 1.1 million barrels per day during the strike from the usual output of around 3 million bpd, tarnishing the country's image as a reliable exporter. "The workers have achieved their main objective of getting their message across," said Faisal Abu Sulaib, another political science professor at Kuwait University. Saif al-Qahtani, chairman of the oil workers' union, said he could not speak for other unions but that some of them also opposed wage system reform.

Some other union members and analysts said a string of strikes in Kuwait remained unlikely. An official at the headquarters of the Kuwait Trade Union Federation, which represents 15 unions in the energy and government sectors, said it had not been informed of any other planned walkouts.

Nevertheless, in the wake of the oil strike, the government may move even more gradually and cautiously with reforms. While most of the current parliament has been relatively supportive of the idea of reform, legislative elections are due next year, and the government will not want the issue of austerity to cause the election of a more antagonistic parliament.

"Negotiations may take time, but my expectation is that the government will ultimately move towards a compromise on some of the union's demands to prevent further economically damaging escalations," said Coline Schep, a Middle East and North Africa associate at consultancy Eurasia Group. "Future strike action in the oil sector, or public sector more broadly, cannot be ruled out as it is a fairly well-established phenomenon in Kuwait...It is in the government's interest to try and avert further stoppages."