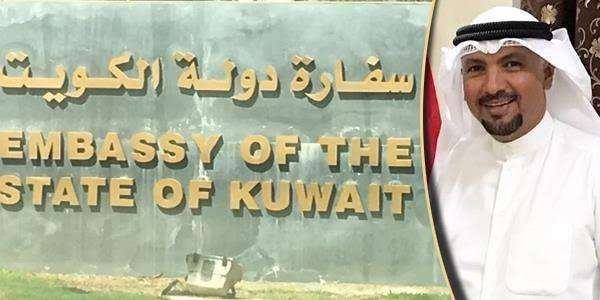 The Embassy of Kuwait in New Delhi on Tuesday expressed its appreciation for solidarity of the government and people of India in wake of the passing away of the late Amir Sheikh Sabah Al-Ahmed Al-Jaber Al-Sabah.

In a statement to the Kuwait News Agency, thanked Indian government for observing an official mourning and lowering its flag to half mast and cancelling all entertainment programmes.

This shows the respect and care that the Indian leadership and government have towards the late Amir of Kuwait Sheikh Sabah Al-Ahmed Al-Jaber Al-Sabah, he said.

He recalled the key role played by the late Amir in cementing the ties between India and Kuwait and his major contributions in preserving global peace and security.

The Ambassador also underlined the key role the late Sheikh Sabah Al-Ahmed Al-Jaber Al-Sabah played in enhancing the friendship and strengthening the exceptional relations between the two nations.

He also expressed his appreciation to all those who condoled especially the Arab, Muslim and other embassies and the multinational organisations in New Delhi for their solidarity with the state of Kuwait and expressing their sorrow at the passing away of humanitarian leader Sheikh Sabah Al-Ahmed Al-Jaber Al-Sabah.

Ambassador Al-Najim also congratulated His Highness the Amir Sheikh Nawaf Al-Ahmad Al-Jaber Al-Sabah on the occasion of his inauguration as Emir of Kuwait and wished success in leading the nations toward more progress and prosperity.

It is noted that the Indian government had declared mourning and flags were flown half in Presidential Palace, Parliament, the Ministry of External Affairs, Headquarters of Air Force and the Navy and other government buildings all over India and cancelled all official entertainment programmes in solidarity with the Kuwait people's huge loss.