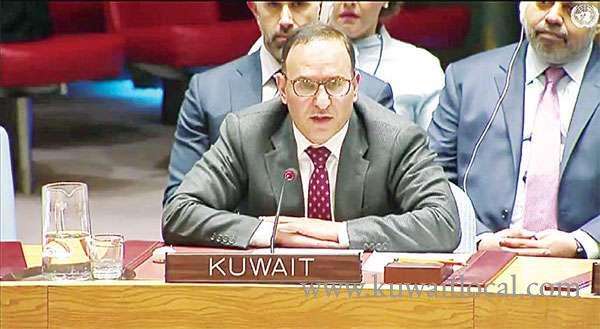 Kuwait strongly condemned the Israeli government’s recent decision to build a new Jewish settlement in the southern city of Hebron (Al-Khalil), home to 200,000 Palestinians, the first since 2002.

This came during a speech by Kuwait’s Permanent Representative to the UN Ambassador Mansour Al-Otaibi on Thursday at a meeting of the Security Council on the situation in the Middle East, including the Palestinian issue. Al-Otaibi said, “this decision is added to the record of unjust Israeli settlement decisions, which constitutes a clear violation of Security Council resolutions, including resolution 2334, which, among other things, affirmed that Israeli settlements constitute a flagrant violation of international law and an obstacle to peace.”

The resolution called on Israel to immediately halt all settlement activities in the Occupied Palestinian Territory, including East Jerusalem, and stressed that the international community would not recognize any changes within the borders of June 4, 1967, including with regard to Jerusalem, except the changes agreed upon by the parties through negotiations, he added. Al-Otaibi noted, “We are meeting today, a few weeks after the conclusion of the general debate of the 73rd session of the UN General Assembly, which continues to resonate to this day in the light of the overwhelming support received by a large number of heads of states and governments in their speeches.”

He stressed the support devoted the message, which outlined the main features of the seven-decade-long conflict with the Palestinian cause: “forcing Israel as an occupying power to stop the cycle of violations of the most basic rules of international law.” “In a commitment to support UN Relief and Works Agency (UNRWA) to ensure its continued delivery of vital services to refugees, Kuwait decided last month to make an additional contribution of $42 million to the Agency’s budget,” he added.

Al-Otaibi pointed out that despite the resounding echoes of these messages, “unfortunately it did not work because the Israeli occupation forces continued their gross and systematic violations of the rules of international humanitarian and human rights law in the Occupied Palestinian Territory.” According to the Special Envoy of the Middle East peace process, the death toll reached more than 205 people, while the number of injured more than 20,000 people, noting that the past two weeks only witnessed the fall of 10 Palestinian martyrs, including three children and injured 882 others, Al- Otaibi said.

Al-Otaibi reiterated his rejection of these aggressive practices and Israel’s systematic policies against the defenseless Palestinian people. “In contrast, the Security Council is unfortunately unable to carry the occupying power to implement its resolutions, giving Israel the green light to continue its practices by consecrating the occupation and thereby undermining any chance for a genuine peace that gives the Palestinian people their legitimate rights,” the Ambassador added. Al-Otaibi affirmed, “It is time to give this issue its right in light of the continuing Israeli attacks and continuation of the inhuman blockade of the Gaza Strip.” Such persistence was an inevitable consequence of the absence of any serious call or demand by the Security Council for Israel to stop these repeated attacks and to abide by its international obligations as an occupying Power under the Fourth Geneva Convention of 1949, Al-Otaibi said.

“We insist on our strategic choice of finding a just, lasting and comprehensive solution to the Palestinian issue in accordance with the relevant Security Council resolutions, the principle of land for peace, the road map and the Arab peace initiative adopted by all Arab countries at the Beirut summit in 2002,” he said. The initiative is based on Israel’s withdrawal from all the occupied Palestinian territories, leading the Palestinian people’s to full realization of their legitimate political rights, including the right to self-determination and the establishment of an independent state with East Jerusalem as its capital, he added.