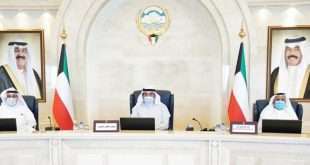 The Kuwaiti Cabinet, in its weekly session on Monday, approved a request presented by Ministry of Health on recruiting Pakistani doctors, nurses and technicians to back up the health sector, and direct flights to Azerbaijan as of July 7.

The meeting headed by His Highness the Prime Minister Sheikh Sabah Khaled Al-Hamad Al-Sabah declared some measures. At the onset of the meeting, Minister of Health Sheikh Dr. Basel Al-Sabah briefed the Cabinet on the latest developments of the coronavirus pandemic on local, regional and international levels mainly in light of the spread of Delta, Minister of State for Cabinet affairs and Foreign Minister Sheikh Ahmad Nasser Mohammad Al-Sabah said after the meeting.

Dr. Basel also informed the ministers about the current health situation in Kuwait that witnesses growing numbers of infected cases, deaths, and hospitals and intensive care units’ patients. He also told the Cabinet about the ministry’s efforts to fulfill the anti-Covid-19 vaccination in order to boost herd immunity in light of the spread of the mutated strains, and the number of vaccinated citizens and expats.

In this regard, the Cabinet stressed the necessity of boosting cooperation amongst health authorities to ensure the safety of the society and enhance heath system so as to control the pandemic to return to normal life

Furthermore, the Cabinet discussed the recommendation of the Economic Affairs Committee on health insurance for students abroad, and assigned the Ministry of Higher Education to take all relevant measures, and coordinate with the Ministries of Health and Finance to arrange all technical and financial matters in this regard.
The Cabinet reviewed the committee’s recommendation on a draft law approving the final account of the state’s financial management for the 2020-2021 fiscal year, and endorsed and referred the bill to His Highness the Deputy Amir to refer it to the National Assembly.

In addition, the Cabinet studied the recommendation of the Public Services Committee on the request of the Minister of State for Communications and Information Technology to form a higher committee to approve the government applications to expedite the digital transformation in Kuwait.the Cabinet assigned the Minister, in coordination with all government agencies, to take all necessary measures to find a unified regulatory framework for e-government applications in a manner that ensures consistency and integration of services.

Afterwards, the ministers discussed political affairs in light of the latest developments on the political scene at the Arab and international levels.They extolled Saudi Arabia’s efforts aiming to resolve the crisis in Yemen and welcomed the consensus of representatives of Yemen’s government and the Southern Transitional Council to halt all forms of escalation.

The Cabinet condemned strongly Houthi militia’s attempt aiming to target international navigation in the Red Sea with two booby-trapped boats in Hodeida Governorate, lauding the efforts of the coalition supporting legitimacy in Yemen to thwart this criminal hostile act seeking to impede the movement of navigation in this vital area.

On the 245th anniversary of the America’s Independence Day, the Cabinet congratulated sincerely the US President, government and people on this occasion, affirming the depth of historic and good ties between the two countries and their friendly peoples.

It also offered sympathy to Cyprus’ President Nicos Anastasiades for the victims of the forest fires that broke out north of Limassol and Larnaca, voicing its confidence in the ability of officials of these friendly countries to overcome these natural disasters.

Finally, the Cabinet expressed its great sorrow over the crash of Philippines’ military plane that led to the deaths or the injuries of some people, offering heartfelt condolences to President Rodrigo Duterte and the families of the victims.