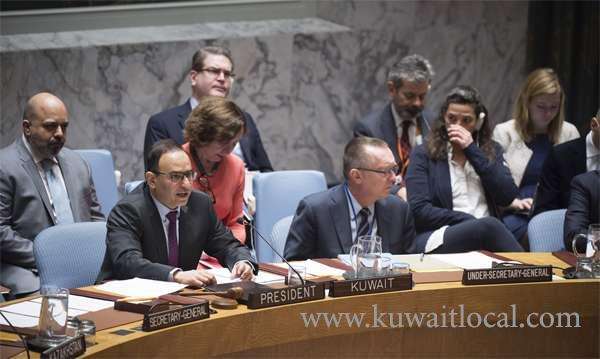 Kuwait and Sweden are keen on fully implementing UNSC Resolution 2401 which regards to the 30-day ceasefire in Syria, an act providing a leeway for humanitarian efforts to take effect, said a Kuwaiti diplomat late Tuesday.

In a speech on behalf of both his country and Sweden, Kuwaiti permanent delegate to the UN headquarters in New York, Ambassador Mansour Al-Otaibi told a UNSC meeting on Syria that the humanitarian situation there was getting much worse than before. This month coincides with the eighth anniversary of the beginning of the Syrian conflict and still the demands for halting violence were not met, said the ambassador.

The UNSC Resolution 2401, which called for the halt of violence for 30 days, aimed at allowing humanitarian actors to operate freely within Syria and especially in eastern Ghouta to help those in need, said Ambassador Al-Otaibi who indicated that a month had passed and the situation is becoming much bleaker.

The diplomat said that Kuwait and Sweden were keen on following up reports regarding the implementation of the resolution, adding that both countries encouraged the UN Secretariat to continue its efforts to ensure that the decision was fully in effect.

On the current status quo in eastern Ghouta, Ambassador Al-Otaibi said that the situation was alarming with the continuation of bombardment on part of the Syrian regime and its allies, resulting in many deaths and injuries amongst the civilian populace.

The UN is encouraged to register refugees fleeing from the scenes of violence in eastern Ghouta as part of the Resolution 2401 documentation and follow up process, said the Kuwaiti diplomat who affirmed that other international entities and organizations must also share the burden of helping the innocent people of the region.

The Astana agreement’s guarantors Russia, Iran, and Turkey must abide by their de-escalation deal reached on March 16 in Kazakhstan, said the ambassador who called on these states to follow up on their agreement in their next meeting to be held in Istanbul, Turkey, April 4.

US Ambassador Nikki Haley on Tuesday rebuked the UN Security Council over Syria, saying the failure of a 30-day ceasefire should be a “day of shame” for council members. Russia hit back that it was the only country working to turn the ceasefire into a reality on the ground in Syria, where government forces have recaptured nearly all of eastern Ghouta in a fierce month-long offensive. “This should be a day of shame for every member of this council,” said Haley.

She said 1,600 people had “died on our watch” in eastern Ghouta since the council unanimously adopted a ceasefire resolution on Feb 24 after intense negotiations with Russia, President Bashar al-Assad’s ally. Syrians continued to be taken on buses out of eastern Ghouta on Tuesday in an evacuation the West sees as a strategy of starve-and-siege, directed against civilians to force a surrender of armed groups. “After years of enduring siege and starvation, residents are surrendering eastern Ghouta,” said Haley.

Russian Ambassador Vassily Nebenzia said the departures were untary and that Moscow’s forces were providing food, shelter and medical aid to those in need. “Perhaps it is not to the liking of some, but in fact we are the sole member to undertake concrete measures to implement Resolution 2301,” said Nebenzia. France expressed concern with the fate of 55,000 civilians held in nine camps administered by the Syrian government near eastern Ghouta, without access to water or electricity. “Their fate has not improved. Their hell has just moved a few kilometers away,” said French Ambassador Francois Delattre. UN aid agencies continue to be denied access to eastern Ghouta. Sweden and Kuwait, which drafted the ceasefire resolution, maintain that it remains in force and are urging action to ensure the truce finally takes hold across the country. Aid groups need $150 million to provide urgent relief to a quartermillion people recently displaced by separate offensives by the Syrian government outside Damascus and by Turkish-led forces in the north, a top UN Syria official said Wednesday.

UN coordinator Ali al-Za’atari said some 80,000 people have fled the government’s offensive in the eastern Ghouta region east of Damascus, where shelling and airstrikes have killed some 1,600 people in five weeks. He said 50,000 were still living in shelters that have been stretched beyond capacity. Around 26,000 people had returned to their towns after they were recaptured by the government, said Khaled Hboubati, the head of the Syrian Arab Red Crescent, at a joint press conference with al-Za’atari in Damascus.

The International Red Cross said Monday that children were emerging from eastern Ghouta with diarrhea, lice and skin diseases. It said many walked for kilometers (miles) on bare feet to reach the shelters. The shelters were overcrowded, had no proper sanitation, and lacked toilets and showers, said the ICRC. It said it was working with the Red Crescent to improve them.

The Russian military operation in Syria said Monday more than 120,000 residents had arrived on the government’s side of the front lines around eastern Ghouta. The Syrian Observatory for Human Rights monitoring group said 100,000 had crossed over. None of the figures could be independently verified. Another 180,000 displaced Syrians are in need in the northern town of Tel Rifaat, after Turkish forces seized the Kurdish-controlled town of Afrin, said al-Za’atari. He told reporters in Damascus that “finance is coming, but is still beneath the required level.” A renewed push by the Syrian government and Russia to take the last rebel-held pocket in eastern Ghouta could drive tens of thousands more out of their homes and into shelters.