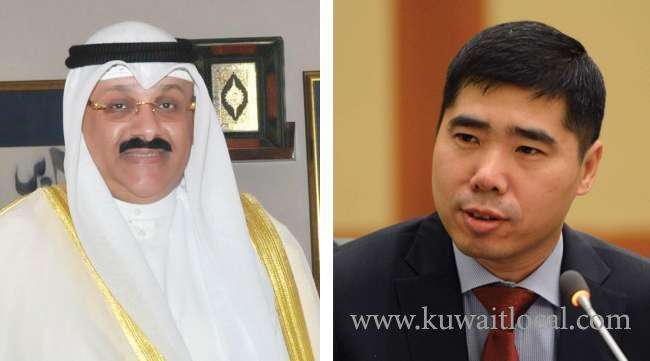 The State of Kuwait and China expressed optimism that the "Belt and Road" initiative, announced in 2013, will help develop global economic growth.  Speaking on the subject, Kuwaiti and Chinese diplomats both affirmed to KUNA that the initiative would result in the revival of many businesses especially within the central Asia region.

Kuwait's Ambassador to China Sameeh Johar Hayat said that partaking in the initiative "the Silk Road Economic Belt and the 21st-century Maritime Silk Road" was within the interests of his country, noting that the plan fell within Kuwait's 2035 vision for development.

Kuwait's vision and the Chinese initiative share many aspects, said the diplomat who affirmed that the global economy would benefit from the success of both plans.

He indicated that Kuwait was amongst the first Arab nations to have signed the Belt and Road initiative.  Ambassador Hayat said that his country would be partaking in the May 14-15 international media cooperation forum dedicated to the initiative and revealed that over 80 countries will participate in the event.

Kuwait's Ambassador took the chance to laud the Kuwaiti-Chinese relations and affirmed that his country will do its best to help Beijing's initiative to be a success.  On his part, Chinese Ambassador to Kuwait Wang Di said that the Belt and Road initiative will not only benefit China, it will have a greater impact on the Asian region and the world.

Di lauded Kuwait for being amongst the first countries to sign the initiative.  He reiterated the fact that the plan will benefit both China and Kuwait immensely, adding that the Belt and Road initiative will help achieve mutual further economic progress.

On the upcoming forum, Ambassador Di revealed that the event would help attract some 1,200 participants from several world countries, international organizations, and business groups.

By naming Minister of the Amiri Diwan Affairs Sheikh Nasser Sabah Al-Ahmad Al-Jaber Al-Sabah as the head of the Kuwaiti delegation to the forum, the GCC country displayed a great interest in the success of the event and the initiative, said the Ambassador.

Ambassador Di hoped that the forum would achieve its goals in bolstering economic and commercial cooperation amongst countries in Asia and expressed confidence that the global economy will benefit from the plan.