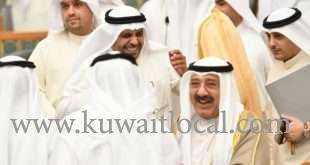 His Highness the Amir Sheikh Sabah Al-Ahmad Al-Jaber Al-Sabah sent Wednesday a cable of congratulations to Minister of Information and Minister of State for Youth Affairs Mohammad Al-Jabri.

His Highness the Amir hailed the minister’s distinguished performance in response to the recent interpellation at Parliament. His Highness also lauded MPs’ respected and sophisticated democratic practices while grilling the minister.

The National Assembly held a special session on the no-confidence motion Wednesday, during which 34 members voted against the motion, 12 voted in favor and two abstained. The minister voiced gratitude to the Assembly for their renewed confidence in him, promising to work diligently and exert more efforts to better serve the country.

Meanwhile, Assembly Speaker Marzouq Al-Ghanim congratulated Al-Jabri for surviving the no-confidence motion. He also praised the proponents of the grilling – MPs Adel Al-Damkhi, Riyad Al-Damkhi and Mohammed Al-Dallaal – as well as all those who spoke up during the session for the refined display of Kuwaiti democratic practice, especially during the Holy Month of Ramadan.

Several recommendations regarding the interpellation were submitted after voting on the no-confidence motion as follows:

■ Al-Jabri should submit a report from the Public Authority for Agriculture Affairs and Fish Resources (PAAAFR) on food security before the end of September
■ The State Audit Bureau (SAB) should submit a report by the end of October on the violations and comments of authorities mentioned in interpellation
■ The parliamentary Public Funds Protection Committee should review articles of the interpellation and submit its report by the beginning of the next legislative term During deliberations on the motion, MPs Yousef Al-Fadala and Riyad Al-Adsani spoke in support of the motion while MPs Sadoun Hammaad and Awda Al-Ruwai’e spoke against it.

The MPs, who support the motion, asserted that the minister must be held accountable for his performance; considering the increase in the number of violations in every authority under his supervision.

They stated that reports from SAB confirmed the ineffectiveness of supervision over PAAAFR, made worse by the minister’s failure to respond to numerous points in his interpellation particularly the allocation of agricultural plots, mismanagement of the Information Ministry which led to loss of KD 30 million income and influx of employees. On the other hand, the two objecting MPs claimed that at least six MPs who signed the motion did so for electoral gain which has no political weight on the matter at hand. They also pointed out several unconstitutional articles in the interpellation such as the influx of employees, as the Civil Service Commission is the entity responsible for governmental employment, not the minister.

They also questioned the validity of the interpellation itself, since notices were regarded as violations and the parliamentary committee investigating the allocation of agricultural plots has yet to conclude its report.

On the other hand, 22 MPs submitted a request for a special session to discuss the General Pardon Bill on the sidelines of Wednesday’s session. Al-Ghanim affirmed that invitations will be distributed soon; but since the request was for this coming Sunday, the session might not take place

Flights To India Awaiting Final Approval Special charter flights to Indian destinations are expected soon with the signing of the Transport Bubble between the two countries, a reliable source disclosed to The Times, Kuwait. It is expected... August 05, 2020 0 16343 Category: Information

The Airport Continues Its Commercial Flights According to Alqabas Kuwait International Airport continued to operate commercial flights for the fifth consecutive day, as 14 flights arrived in the country yesterday, while 16 flights departed. A re... August 06, 2020 0 7647 Category: Travel

19 Dead and 127 Injured after Air India flight crashlands in Kozhikode, breaks into two 19 passengers died and 127 were injured, including 15 seriously, when a plane coming from Dubai met with an accident at Karipur airport in Kozhikode, Malappuram Superintendent of Police (SP) said on F... August 07, 2020 0 5923 Category: India

KTTAA chairman criticizes abrupt decision to ban expats from 31 countries without prior notice Under the pandemic situation the decision was taken by Kuwait government to ban travel from 31 countries. Today Mohammad Al-Muthairi, the Chairman of the Board of Directors of the Kuwait Travel and To... August 05, 2020 0 4585 Category: International

3 Stage Plan For Return of Expats - MOI High sources revealed Alqabas  that the return of residents to the country will take place according to 3 successive stages, during which priority will be according to the needs of the state, wit... August 07, 2020 1 4256 Category: Expats

Allow Entry To Non-Kuwaitis From The 31 Banned Countries Who Are Related To A Kuwaiti The General Administration of Civil Aviation issued a circular to airlines operating at Kuwait International Airport allowing non-Kuwaiti passengers who have a relationship with a first-class Kuwaiti ... August 09, 2020 0 3006 Category: Travel

Ministry Of Health Prepared The List Of Expats Who Are Struck Outside The Country Health Ministry is developing a inventory  of its employees, who are stuck outside the country and  are unable to return to Kuwait thanks to restrictions imposed  due to coronavirus pan... August 06, 2020 1 2990 Category: Kuwait

Kuwait – India Agrees To Evacuate 1,000 Indians Per Day Back To India The Indian Government is about to start flights to bring back Indian expats who are willing to come back to India from Kuwait. Regarding this Indian authority had a discussion with the Kuwait counterp... August 06, 2020 0 2884 Category: Travel
Popular Offers