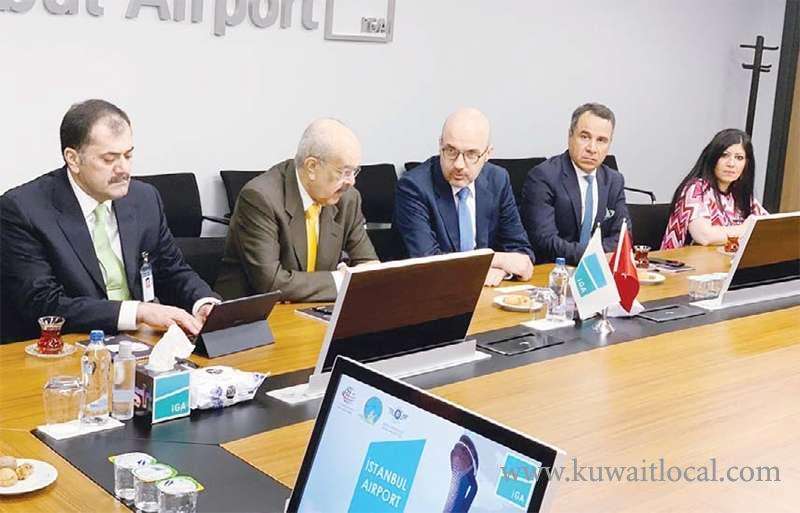 National carrier Kuwait Airways is set to receive next month between five to six Airbus A320 aircraft as part of the airline’s plan to provide quality services to its clientele.

Kuwait Airways will own a total of 28 Airbus A320 by next year, its Chairman Youssef Al-Jassim told KUNA as he toured Istanbul’s new airport, where he held talks with officials from IGA; the consortium building and operating the sprawling facility. On his visit to Istanbul, he said it was a step towards stronger aviation ties between Kuwait and Turkey, ahead of a planned “partnership deal” Kuwait’s flag carrier seeks to clinch with IGA.

The agreement primarily entails airport services, the official divulged, describing Turkey as a hotspot that has long beguiled Kuwaiti travelers, a fact he attributed to the commonalities both nations share.

Aviation
The Kuwaiti official’s visit is crucial to push aviation ties, according to IGA’s Chairman Murat Sumutcu, who pointed out that it was in the best interest of both countries. He added that the Kuwaiti delegation got a firsthand look at the cutting-edge technology employed by the new mega airport, which has already begun serving 16 million people.

Kuwait’s Consul General in Istanbul Mohammad Al-Mohammad emphasized the importance of closer aviation ties as well, given the fact that the number of Kuwaitis to have visited Turkey has increased exponentially. Kuwait’s national carrier is offering daily flights to Turkey all summer long as part of a newly revamped itinerary. Meanwhile, Turkish Airlines has inked a code sharing agreement with Kuwait Airways, Kuwait’s sole national air carrier.

The Turkish airlines said in a press release, on Tuesday, that the agreement would be applicable for joint fl ights from Kuwait International Airport and the airports of Istanbul and Sabiha Gokcen. The accord was signed at the Turkish Airlines headquarters in Istanbul. The inking ceremony was attended by Director General of the Turkish Airlines Bilal Eksi and KAC Chairman Yousef Al-Jassem. It will allow the two sides to reach new destinations via each other’s networks.

5 Year Residence For Expats And 10 Years For Expat Businessmen A new residency law will be introduced that underlines that an expat can acquire a residency visa for up to 5 years and for an expat businessman with a valid project, it is for 10 years. Among the ... August 12, 2020 2 6864 Category: Expats

After Days Of Waiting, First Flight Left To India From Kuwait Today After a long wait of more than three weeks, the flight to India resumed from Kuwait international airport today with the first flight carrying 322 Indians stranded here to Delhi. The flight, arrang... August 11, 2020 0 6100 Category: Kuwait

Allow Entry To Non-Kuwaitis From The 31 Banned Countries Who Are Related To A Kuwaiti The General Administration of Civil Aviation issued a circular to airlines operating at Kuwait International Airport allowing non-Kuwaiti passengers who have a relationship with a first-class Kuwaiti ... August 09, 2020 0 4595 Category: Travel

Steps To apply for Renewal of Kuwait Society Of Engineers (KSE) Membership And No Objection Certificate Online If you hold a engineer visa KSE membership is must and you have to renew it Every Year, Below we will explain the process about renewal KSE membership and applying NOC, this process is for who already... August 10, 2020 0 4498 Category: Kuwait Society of Engineers

Large Scale Expat Deportation Plan In Progress Planning is underway for the large scale arrest and deportation of around 126,000 expatriates living illegally in Kuwait, reports Al Jarida daily. They did not take advantage of the amnesty in April a... August 11, 2020 1 3433 Category: Expats

Only educated expats over 60 will have their residence renewed Public Authority for Manpower (PAM) has announced that expats at the age of 60 and above, without a university degree will need to make preparations to leave the country by end of this year. They are ... August 11, 2020 2 2900 Category: Expats
Related News
Visit Visa
Visit Visa
View All
Indemnity
Indemnity
View All
Dependent Visa
Dependent Visa
View All
Driving License
Driving License
View All
Project Visa
Project Visa
View All
Termination
Termination
View All
Civil ID
Civil ID
View All
Crime News
Crime News
View All