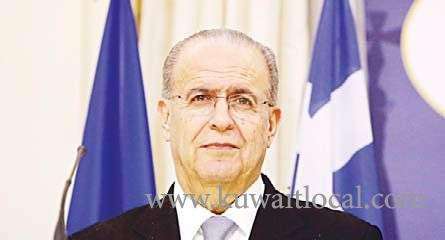 Kuwait and Cyprus have established a very close relationship which they have been cultivating for over half a century now, Minister of Foreign Affairs of the Republic of Cyprus Ioannis Kasoulides told the Arab Times on the sidelines of a diplomatic mission initiated through an invitation from Kuwait’s Minister of Foreign Affairs Sheikh Sabah Al-Khaled Al-Hamad Al-Sabah. Kasoulides was on his second visit to Kuwait last week, coinciding with the 50th anniversary of the two countries’ diplomatic relations. He stated that His Highness the Amir Sheikh Sabah Al-Ahmad Al-Jaber Al-Sabah is “a wise person with a clear position on a number of issues related to foreign policies.”

He affirmed that His Highness the Amir holds Cyprus in high regard and remembers the position of Cyprus during the Iraqi invasion, as Cyprus understands the issue of invasion and occupation very well. He also disclosed that during the meeting, His Highness the Amir expressed contentment over the signing of an agreement between the two countries in the first visit, which allows for evacuation of Kuwaitis from conflict areas around the Middle East if the need arises.

On his meeting with his Kuwaiti counterpart – Sheikh Sabah Al-Khaled Al-Hamad Al-Sabah, Kasoulides disclosed they had extensive talks on the standing agreements between the two countries and ways to improve them, in addition to numerous issues concerning the region. “We are two moderate countries believing in peace and stability,” noted the foreign affairs minister of Cyprus as he further spoke about the similar positions that both countries hold regarding anti-terrorism.

When asked about Kuwaiti-Cypriot relations and plans to broaden its horizon, he said they are currently working on an air services agreement which will hopefully pave way for direct flights from Kuwait to Larnaca. On the other hand, the two countries are finalizing an agreement on avoidance of double taxation in order to further enhance their business relations, the minister added. Despite its size, Cyprus enjoys a large capacity for

shipping. For this reason, Kasoulides was pleased to add that an agreement on shipping and exchange of expertise on this field is underway. Also, considering the discovery of natural gas reserves off the shores of Cyprus, a memorandum of understanding in the field of energy was signed during the meeting of the two ministers. Furthermore, the State of Kuwait was elected in June to serve as a nonpermanent member of the United Nations Security Council for a term of two years starting from January 2018 and Cyprus was one of the countries that strongly advocated for Kuwait’s membership.

On this matter, Kasoulides pointed out Kuwait is a small but moderate country which is very active in mediating for peace. He also asserted that such a small country will never have a hidden agenda, so it is fair and it greatly contributes to ongoing efforts to maintain peace and security in the world. He also mentioned that Kuwait plays an important role in providing assistance to developing countries and leading humanitarian aid initiatives, revealing Kuwait was one of the first to respond in terms of granting financial aid during the Turkish invasion of Cyprus. Moving on, Kasoulides was asked about the position of Cyprus regarding Qatar diplomatic crisis, he lauded the efforts of His Highness the Amir Sheikh Sabah Al-Ahmad Al-Jaber Al- Sabah and affirmed Cyprus’ support for his initiatives; while stressing that the matter at hand must be resolved within the GCC alone and the initiative emerging from a GCC country is very important.

On the position of Cyprus about other conflicts and crises in the region, the minister first highlighted the common foreign and security policies of the European Union. He said Cyprus is in favor of international legality, peaceful resolutions and no-interference in internal affairs. On Iraq, Cyprus believes that internal disputes must be resolved within territorial integrity through peaceful means, the minister said. On Syria, political solutions in accordance with United Nations resolutions are required. Cyprus is against other countries intervening for the sake of their own agendas rather than the pursuit of resolution, Kasoulides explained.

Touching on Cyprus peace talks and relations between Turkey and Cyprus, Kasoulides clarified that they have made progress in these negotiations which have never been done before; with only one remaining issue — making Cyprus a unified country. “After the upcoming elections, negotiations will resume and we are optimistic that they will lead to a successful outcome,” added the minister while explaining that the dispute is on two issues — the internal issue in which almost every aspect has been agreed upon with the Turkish Cypriots through the establishment of a bizonal bicommunal federation, and the external issue in which Turkey is to cease any form of intervention in Cypriot internal affairs through negotiations.