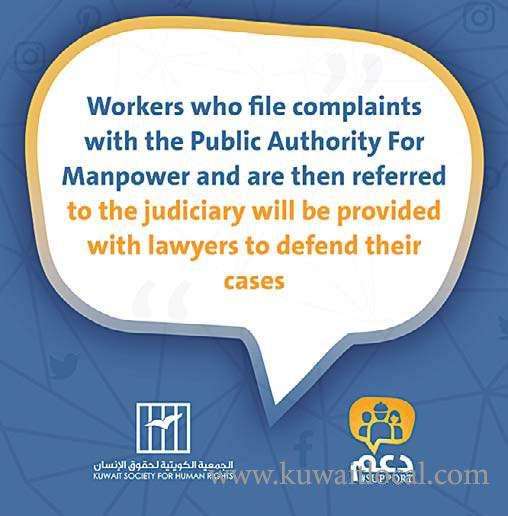 Al-Ajmi pointed out that workers who file complaints with the Public Authority For Manpower (PAM) and are then referred to the judiciary will be provided with lawyers to defend their cases if they can’t afford to pay for a lawyer in case that they receive monthly salary not more than 100 Kuwaiti dinar or if the complaint requires direct legal representation in courts.

KSHR will also receive some cases through the hotline service if the case involves direct violation of the workers’ rights. “Centers of PAM resolve problems through negotiations but they don’t provide lawyers when some complaints are referred to the judiciary.

Many complaints have been referred to the labor courts. Last year, PAM received a total of 1,1071 complaints related to workers’ financial dues and referred 6,936 (62.6%) complaints of them to the judiciary,” he added.

Al-Ajmi indicated that the really high costs of hiring attorneys hinder ordinary workers from obtaining their rights, not to mention the prolonged litigation that can take several years, both for citizens or migrant workers.

The residency period of some complainants ends during this long period, and they become unable to renew their residency. So, they resort to violate the conditions of residency which force them not to seek judicial redress, or are being arbitrarily deported without getting their rights.

This service activity is part of the “Support” Project that aims to provide legal protection for migrant workers in Kuwait. KSHR implements this project in collaboration with the Swiss Agency for Development and Cooperation (SDC) and PAM, under the honorary auspices of Hassan Kazem Mohammed, Assistant Undersecretary for Development Affairs in the Ministry of Social Affairs.

The project is implemented in six languages: English, French, Hindi, Urdu, Filipino and Arabic. A team of lawyers has been selected in accordance with certain criteria related to having skills and expertise in workers’ cases, as well as tendency to defend human rights. KSHR started implementing this activity at the beginning of 2018, while continuing receive the inquiries and complaints of workers at the hotline number 22215150 both in Arabic and English and also through the e-platform: http://togetherkw. org.

The Public Authority for Manpower has announced conditions for granting work permit valid for three years maximum, reports Al-Anba daily. The conditions include validity of the license and passport of the worker, approval of the employer according to the work contract, and early renewal of the work permit — six months before expiry.

Meanwhile, the authority has activated its social networking accounts to easily communicate with the public; in addition to applications for receiving complaints through social media and informing the concerned individuals about their violations through WhatsApp and Instagram. The authority vowed to maintain confidentiality in dealing with complaints