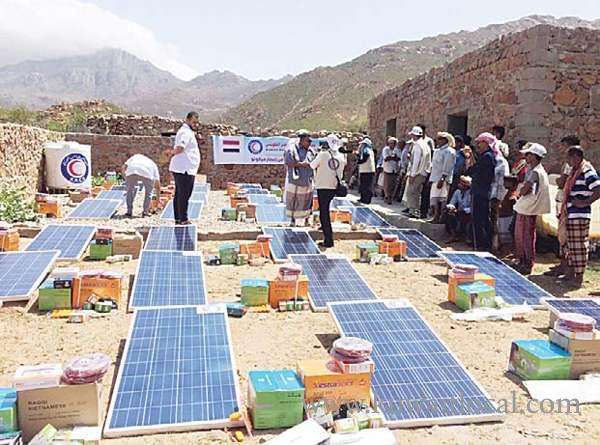 Kuwait Red Crescent Society (KRCS) announced Friday the launch of solar street lights in Daba Karajah village in Yemen’s Socotra Island, northwest Indian Ocean near the Gulf of Aden. The village suffers lack of street lights due to the devastating impacts of Cyclone Mekunu, which hit the Socotra Archipelago recently and caused multiple damage to the Island, Abdulrahman Al-Aoun, head of KRCS mission in Yemen, told KUNA. KRCS is currently intensifying its relief and development efforts in the village in cooperation with local Yemeni authorities in Socotra, providing food supplies, blankets, solar panels, and backup power to light up the entire village, he added.

These efforts are part of implementing the directions of His Highness the Amir Sheikh Sabah Al-Ahmad Al-Jaber Al-Sabah to alleviate the difficult living conditions of Socotra’s people, said Al-Aoun. Kuwait will continue delivering relief and humanitarian aid to the Island’s people via the relief airlift, he affirmed, pointing out his meeting with Socotra’s Governor Ramzy Mahrous, who thanked the Kuwaiti government for answering the help call of the Island’s people.

Meanwhile, KRCS said 90 volunteers are providing first aid and services to worshippers performing prayers of the last 10 days of Ramadan at the Grand Mosque. In a statement to KUNA on Saturday, head of youth and volunteers’ department at KRCS Musaad Al-Enezi said the male and female volunteers were given a training course in first aid to enable them to deal with any health issues or emergencies that may encounter worshippers as they perform late-night prayers.