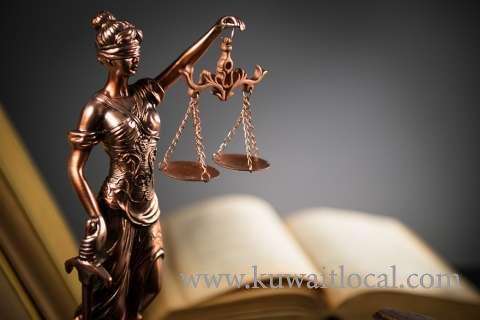 There is nothing more important and more precious than freedom, but freedom should not come at the expense of justice, which supports and protects it, defines its frameworks. A state which has no justice is no better than a jungle, regardless of the standard of living, comfort and fortune.

Justice is not complete if it is delayed. What is the benefit of posthumous justice? In the modern era, there is no excuse for delay in justice. I mean here the Ministry of Justice should not be negligent to provide justice in an appropriate environment to facilitate litigation and implement judgments more quickly.

For more than half a century what we see in Kuwait is a clear failure of the support apparatus to the judiciary. The verdicts are being delayed, lawsuits are increasing, the buildings and offices are deteriorating, the loss of files continues and complaints of delayed judicial declarations are on the rise.

All these take place in spite of the existence of human capabilities in the ministry, and the availability of money and expertise to put an end to this lapse. All those who occupy this ministry either does nothing or stop reforms which had been introduced by the predecessor.

For example, what is the reason behind the presence of government lawyers at the Palace of Justice? Why are not they distributed to courts in various provinces to ease the crowd of visitors and ensure support for those who come from far away areas?

Why not solve the problem of shortage in the number of declaration representatives by issuing necessary legislation? Why the number of courts have not been increased to expedite cases which are accumulating at the judiciary?

Why is the delay in the establishment of reconciliation institutes to look into various cases at the police stations as was the case recently on the issue of reconciliation in traffic accidents, which saved a lot of time and effort of thousands of citizens and residents every month.

Why delays in the use of modern technical applications that can facilitate the issuance of judgments and inform the parties about their cases including the date of court sessions?

Why is the judiciary still complaining about minor issues such as lack of photocopying machines, registration papers and lack of support from secretarial expertise?

Why in this state-of-the-art era there is delay in printing judgments, which often are full of spelling and typographical errors, add to this the difficulty in reading the investigations which are often illegible?

Why are the case file tracking systems not activated to ensure documents are not lost or manipulated? In any case, why delay in providing these in light of the availability of the fund which more often than not is considered as injustice against all litigants and the right of the people.

An urgent lawsuit such as interdicting a person of his legal capacity, for example, should not take six months or more since such person may have large businesses, industrial workshops and thousands of workers, so who will manage all these if the owner loses the capacity?

Is it not worth prompt action by the judge of urgent matters, for example, to stop the harm afflicted to parties due to the failure of the interdicted person, man or woman, from running his property and interests?

The space is small here to mention all the problems experienced by litigators, and every delay in solving these issues will worsen situation and complicate the solution in future.

Minister of Justice, we hope you will distance yourself from formalities and devote your time to the interests of citizens. Complaints and grievances have increased and I do not think that you, or any other person with conscience can accept this miserable situation.