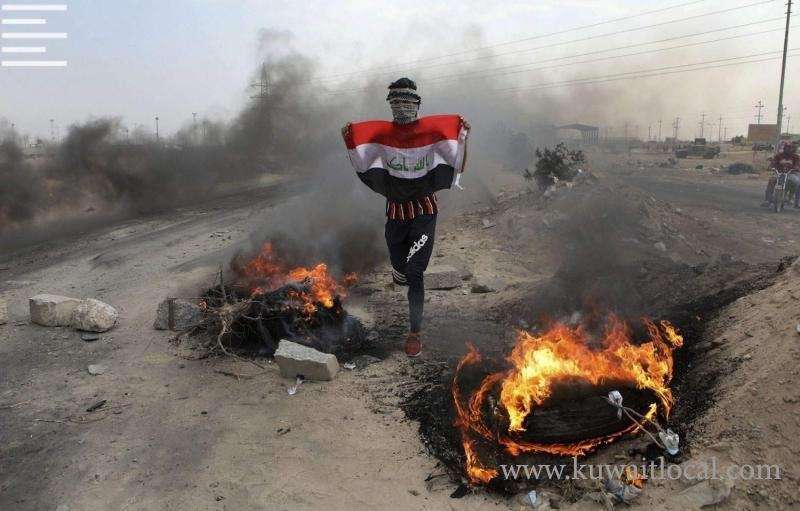 Four Iraqis were shot and killed on Thursday as they tried to remove barriers blocking their march in central Baghdad, while in the south, protesters forced the closing of the country's main port hours after services had resumed following days of closure, officials said.

Demonstrators have been trying to reach the Green Zone, which houses government offices and foreign embassies.

Along with the four killed, at least 24 protesters were wounded as security forces fired live rounds and tear gas to disperse the march in downtown's Rashid Street, where the central bank is located, security and medical officials said.

The protesters were trying to remove barriers near two bridges that lead to the west bank of the Tigris River. Now all bridges leading to the Green Zone have been blocked by security forces.

Later, a security official said more reinforcements have been added to the entrances leading to the Green Zone. All officials spoke on condition of anonymity in line with regulations.

Tens of thousands of people have taken to the streets since last month in the capital and across the largely Shiite south to demand sweeping political change. The protesters complain of widespread corruption, a lack of job opportunities and poor basic services, including regular power cuts despite Iraq's vast oil reserves. More than 250 people have been killed since the unrest erupted on Oct. 1.

Protesters have blocked roads to raise pressure on the government. A similar tactic is being used in Lebanon's ongoing anti-government demonstrations.

In southern Iraq, the reopening of the Umm Qasr port, which houses a vital oil terminal and is an entry point for food and basic goods, came a day after the military called on the protesters to stop blocking roads and ports. It said the blockages had cost Iraq $6 billion and vowed to arrest those responsible.

On Thursday afternoon, protesters returned, burning tires and blocking the road to the port. Trucks came to a standstill and the port shut down again.

Iraq's leaders have promised reforms and early elections, but the process they laid out could take months, and the protests have only grown in recent days.

Iraq has held regular elections since the overthrow of Saddam Hussein following the US-led invasion of 2003, but they have been dominated by Shia Islamist parties that have failed to deliver on promises to improve daily life.

The protests pose the biggest challenge to the government since it declared victory over militants from ISIS nearly two years ago.