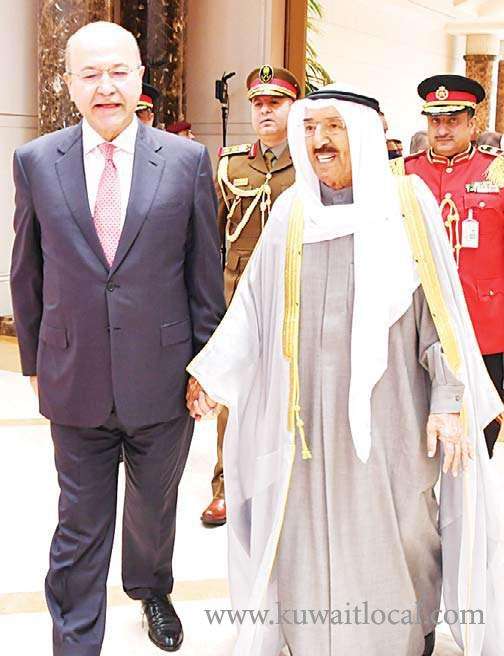 Iraqi President Barham Saleh said he is honored to meet His Highness the Amir Sheikh Sabah Al-Ahmad Al-Jaber Al-Sabah and discuss means of boosting cooperation between the two countries.

The visit will include delivering part of Kuwait’s properties stored in Iraq’s Ministry of Foreign Affairs, while the rest of will be delivered in the future, Saleh told Al-Rai newspaper on Sunday.

Meanwhile, President Saleh noted that the Iraqi people are determined to cooperate with Kuwait to overcome the painful past; referring to the dictatorship era of Saddam Hussein and his invasion to Kuwait in 1990.

He also voiced support to Kuwait in light of the damage caused by the recent heavy rains, adding that Iraq is willing to provide any aid needed. His Highness the Amir, meanwhile, received at Bayan Palace the visiting Iraqi President and his accompanying delegation. Official talks were held between the two sides, where His Highness the Amir headed the Kuwaiti side.

According to a statement by Minister of Amiri Diwan Affairs Sheikh Ali Al-Jarrah Al- Sabah, the talks dealt with bilateral relations and ways to strengthen cooperation in various fields. His Highness the Amir then held a lunch banquet in honor of the distinguished guest and his accompanying delegation. Saleh and his accompanying delegation arrived in Kuwait on an official visit.

The Iraqi president was received at Kuwait International Airport by His Highness the Amir, His Highness the Crown Prince Sheikh Nawaf Al-Ahmad Al-Jaber Al-Sabah, National Assembly Speaker Marzouq Al-Ghanim and His Highness the Prime Minister Sheikh Jaber Al-Mubarak Al-Hamad Al-Sabah, in addition to a host of senior state officials Advisor at the Amiri Diwan Mohammad Abulhassan is heading the mission of honor to accompany the distinguished guest. President Saleh is accompanied by a high-level government delegation.