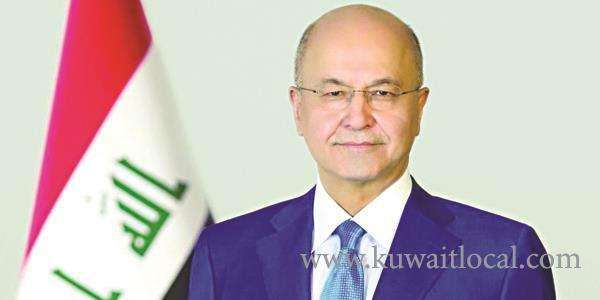 Iraqi President Barham Saleh is due to begin an official visit to Kuwait today, Sunday, as part of a Gulf tour, which includes the United Arab Emirates.

The Iraqi president will hold official talks with the Amir of Kuwait Shaikh Sabah Al-Ahmad Al-Jaber Al-Sabah, the Amiri Diwan announced in a statement.

A statement issued by the Iraqi said that the tour is part of Baghdad-led efforts to build good relations with the Gulf and Arab states, set up bases for good neighborliness and promote economic and development integration.

He made his remarks ahead of receiving part of Kuwait properties and national archives from Iraq, scheduled for Monday.

He said the foreign ministry has been pressing Iraqi authorities to intensify efforts to determine fate of missing Kuwaitis.

Iraq invaded Kuwait in 1990 and occupied the Gulf country for seven months before being ejected by an international coalition.

The Iraqi government said Tuesday it would hand state TV and radio archives back to Kuwait, in line with relevant Security Council resolutions.

Baghdad took the move in the wake of its commitment to enhancing bilateral relations, mainly in political and economic domains, and to resolve all unresolved predicaments, the archive matter included.

It comes “after efforts were exerted to search for and gather the Kuwaiti archives, in accordance with Security Council resolution 2107,” ordered by Iraqi Foreign Minister Mohammad Al-Hakim, added the official. United Nations representatives will be in attendance during the handover, he said.

The United Nations Compensation Commission (UNCC) Governing Council had stated on Thursday that Iraq would pay, effective early next year, 1.5 percent worth of oil sales’ proceeds to the UNCC compensations fund.

The council said in a statement said this move would be in line with its resolution 276/2017 with respect of installments’ payment in 2018. Kuwait, during inauguration of the current council session, expressed appreciation of the commission secretariat and its role in distributing repatriation installments.

The remaining sum that should be paid to Kuwait is approximately $4.4 billion. The UNCC was formed in 1991 as a United Nations Security Council body, with the aim of processing claims and paying compensation for losses and damage Kuwait suffered due to the invasion.