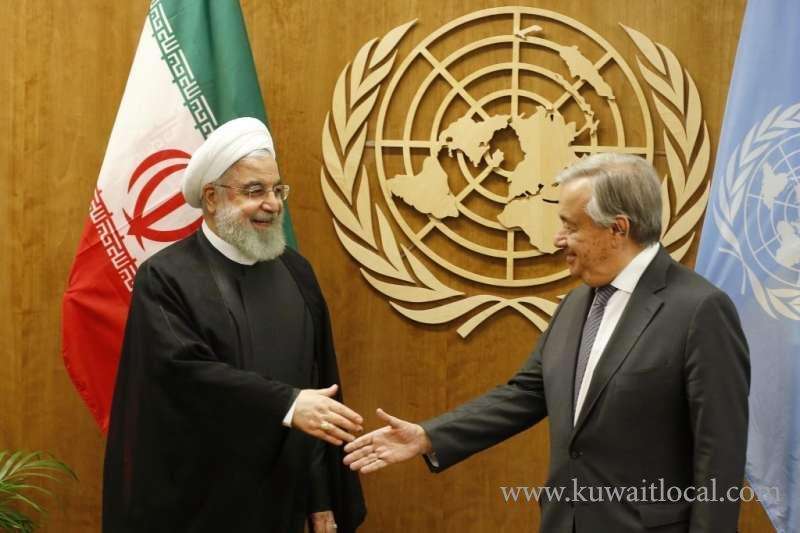 Iran’s president, Hassan Rouhani, has ruled out negotiations on its nuclear programme with the United States so long as sanctions remained in place and said he was not interested in a “memento photo” with Donald Trump.

“I would like to announce that our response to any negotiation under sanctions is negative,” Rouhani said in an address to the UN general assembly in New York.

His remarks represent the final nail in the coffin of efforts to negotiate a high-profile summit between Rouhani and the US president at the UN.

In an eagerly awaited address, Rouhani said: “For one and a half years, the US government has sought to deprive Iran of its right to access the world economy by threats and extra-territorial sanctions … Halt the sanctions and return to your commitments so the dialogue may reopen.”

Iran has “resisted the most merciless economic terrorism” from a nation that is engaging in “international piracy”, Rouhani said. “Memento photos are the final stage of negotiations, not the first one.”

He challenged the sincerity of America’s offer of negotiations, pointing to Trump administration officials’ boasts of the damage inflicted by sanctions on Iran. “We cannot believe the invitation to negotiations by people who claim to have applied the harshest sanctions in history against the dignity and prosperity of our nation,” he said.

His remarks left the US and Iran as far apart as ever despite parallel mediation efforts from France, the UK, Pakistan and Japan.

The impasse leaves the west and its Gulf allies faced with a dilemma over how to respond to the attack on oil facilities in Saudi Arabia earlier this month. The EU has attributed responsibility to Iran, but a detailed report has not yet been compiled. Iran for its part is likely to take further steps away from the nuclear deal, and may escalate attacks on Gulf shipping.

Iran has denied any involvement and says any strikes by the US or Saudi Arabia will lead to “all-out war”. Emphasising the precarious regional situation, Rouhani said on Wednesday: “Our region is on the edge of collapse, as a single blunder can fuel a big fire.”

Some key Gulf states such as the United Arab Emirates are wary of military action. UAE officials said privately that diplomacy is the focus.

The Gulf states believe the Saudi attack has shaken EU support for the existing nuclear deal, and scope now exists to bring the US and Europe together in pursuit of a reworked wider deal that covers Iran’s ballistic missile program and constraints on Iran’s regional behaviour.

Germany, France and the UK remain committed to the nuclear deal but it was becoming “increasingly difficult”, the EU’s foreign affairs chief, Federica Mogherini, said earlier on Wednesday.

Emmanuel Macron and Boris Johnson expended intense energy on the sidelines of the UN general assembly trying to persuade Iran to make a move that would allow Trump to drop sanctions.

Iran claimed it was offering to break the deadlock by moving more quickly to to an era of permanent more intrusive inspections of its potential nuclear sites. But it said it would act only so long as the US agreed to lift its sanctions and the US Congress turned the deal into a permanent treaty.

The proposal, as briefed, did not extend beyond what was proposed previously by the Iranian foreign minister, Javad Zarif, in July and rejected by the US as insufficient.

But Rouhani offered a glimmer of hope in his speech, saying: “Stop the sanctions so as to open the way for the start of negotiations...The JCPOA was a minimum for you and for us, however if you wish more, or require more, you should also give and pay more.”

The US emphasised the negative diplomatic trend by announcing further sanctions against Iran, including by targeting Chinese entities that purchasing oil from Tehran. Speaking to an Iranian dissident group in New York, the US secretary of state, Mike Pompeo, said: “We’re telling China, and all nations – know that we will sanction every violation of sanctions of all activity.”

He said that sanctions were being placed both on companies and on their chief executives.

On the first two days of the general assembly, Macron had sought to persuade the US and Iran to move simultaneously so the Iranians give wider explicit assurance to adjust the nuclear deal, including coming back into compliance with its existing terms, at the same time as Trump lifted sanctions.

In broadcast interviews at the UN Rouhani had admitted that the lack of trust between the US and Iran was making it difficult for either side to move.

At a late-night meeting on Tuesday Johnson urged Rouhani metaphorically to stand by the swimming pool with Trump and to jump together.

The foreign secretary, Douglas Raab, told MPs that the UK was not abandoning support for the current nuclear deal, but said “we can improve on it”.

“Ultimately, we need a longer-term framework that provides greater certainty over Iran’s nuclear programme. And, as the attack on Aramco demonstrates, we must also bring into scope Iran’s wider destabilising activities.”