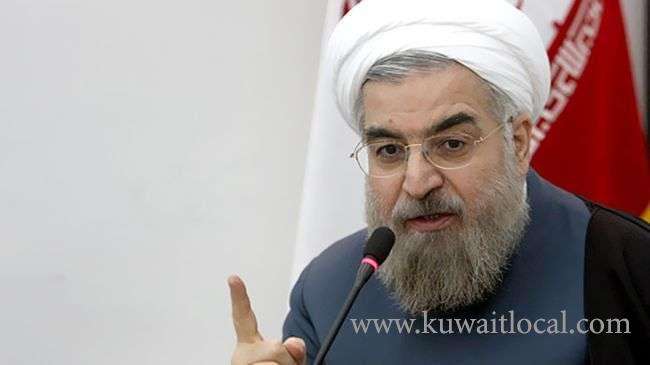 Iranian President Dr Hassan Rouhani will be visiting Kuwait Wednesday where he will be meeting with His Highness the Amir Sheikh Sabah Al-Ahmad Al- Jaber Al-Sabah.

The two leaders will focus on issues pertaining to bilateral relations as well as the latest developments within the region and the world.

The visit comes on an invitation by His Highness the Amir Sheikh Sabah to the Iranian President Rouhani during the Jan 25 visit by First Deputy Prime Minister and Minister of Foreign Affairs Sheikh Sabah Al-Khaled Al-Hamad Al-Sabah to Tehran. Relations between Kuwait and Iran dates back to the 1940s and 1950s prior to the independence of Kuwait.

After gaining independence in 1961, Iran recognized Kuwait as a sovereign country, establishing diplomatic relations in 1962. His Highness the Amir Sheikh Sabah, who was Deputy Prime Minister and Foreign Minister, visited Iran in 1979, making him one of the first Gulf leaders to visit Tehran after the Islamic revolution.

Solidarity
During the era of the Iraqi invasion of Kuwait in 1990, Iran expressed condemnation of the aggression, standing in solidarity with Kuwaitis and their rights for freedom. In 1991, the two countries focused on means to boost relations after the liberation of Kuwait. Again, His Highness Sheikh Sabah, who was First Deputy Prime Minister and Minister Foreign Affairs in 2003, visited Tehran during a critical moment in the region with the US preparing for military action against the Iraqi regime.

The visit also resulted in the signing of several accords aimed at enhancing relations between the two sides. The two countries signed between 1992 and 2014 various agreements to develop relations in all possible domains. In accordance with statistics by the Iranian embassy in Kuwait, commercial exchange between Iran and Kuwait in 2015 had reached $400 million, an increase by 100 percent from $200 million.

Opportunity
A top Iranian official called on the Gulf Arab states on Tuesday to seize the opportunity of a visit by Rouhani to Oman and Kuwait to improve ties, warning that a chance like this would “pass like a cloud”. The six Arab members of Gulf Cooperation Council (GCC), especially Saudi Arabia, accuse Iran of using sectarianism to interfere in Arab countries and build its own sphere of influence in the Middle East. Iran denies the accusations. “Rouhani’s regional initiative to accept invitation of leaders of Oman and Kuwait signals the need for Islamic friendship and restoration of regional ties,” Hamid Aboutalebi, the Iranian president’s deputy chief of staff, tweeted on Tuesday.

“This regional initiative is an opportunity that our regional friends should seize. Opportunity passes like a cloud. Take advantage of the good opportunity,” he added. Saudi Arabia and Bahrain cut diplomatic relations with Iran in January 2016 after protesters torched the Saudi embassy in Tehran. Kuwait, Qatar and the United Arab Emirates recalled their envoys in a show of solidarity with Riyadh, but Oman only expressed regret over the attack, highlighting its better ties. Oman has traditionally resisted Gulf Arab states’ efforts to close ranks against Iran.

It helped to mediate secret US-Iran talks in 2013 that led to a historic nuclear deal signed in Geneva two years later. Kuwait’s foreign minister paid a rare visit to Tehran late in January to deliver a message to Rouhani on the “basis of dialogue” between Gulf Arab states and Iran. Rouhani said Kuwait was among at least 10 countries to have offered to mediate in Iran’s escalating feud with Saudi Arabia.

The Iranian president will meet Oman’s Sultan Qaboos in Muscat on Wednesday before travelling on to Kuwait on the invitation of its ruler, Amir Sheikh Sabah Al-Ahmad Al-Sabah, Rouhani’s deputy chief of staff for communications, Parviz Esmaeili, was quoted as saying on Monday by staterun Press TV. Iran’s ambassador to Kuwait, Alireza Enayati, was quoted by ISNA news agency as saying that “on this one-day visit regional issues as well as bilateral cooperation will be discussed”.

Programme
Iran is, meanwhile, implementing the deal on its nuclear programme agreed with world powers, the head of the UN atomic energy watchdog said on Tuesday, amid concerns the United States will try to alter the terms.

The United States has taken a tougher stance on Iran since President Donald Trump took office on Jan 20, including saying it had put the Islamic Republic “on notice” last month over carrying out a ballistic missile test. Under the 2015 accord between Tehran and six world powers, Iran agreed to curb its nuclear programme in exchange for relief from some US, European and UN economic sanctions. Iran has always said its programme is purely for peaceful purposes. Trump’s administration is considering insisting the International Atomic Energy Agency (IAEA) toughen its policing of Iran’s compliance, including demanding access to military sites, sources have told Reuters.

The United States would need support from the 34 other countries who sit on the IAEA board of governors for military site inspections. But the new administration has so far not contacted the IAEA, the UN nuclear watchdog responsible for verifying Iran’s adherence to the deal formally called the Joint Comprehensive Plan of Action (JCPOA), IAEA Director General Yukiya Amano said. “This is a very early stage of the Trump administration but we are very willing to have interaction with them as soon as possible,” he told reporters on the sidelines of a summit in Dubai. The IAEA remains in “constant interaction” with US civil servants. Amano said “Iran is implementing the JCPOA” apart from some breaches that saw its stock of heavy water slightly exceed the limit set under agreement which have been rectified. Under the deal, Iran is allowed to have 130 tonnes of heavy water. Heavy water reactors can more effi- ciently produce plutonium, which can be used in weapons.

“Nuclear activities by Iran is reduced and so this is a net gain. What is important is to continue to implement” the deal, he said. Amano declined to directly comment on what it would mean if the United States did try to change the deal, particularly if it did so while Iran remained compliant. He said how Iran implements safeguards should be the same as any other country with “no discrimination and no special treatment”. “There is nothing political that will change our implementation,” he said. “Implementation is very important and that requires efforts by all and … we have a very robust verification tool.”

The head of the United Nations’ atomic agency said Tuesday the administration of US President Donald Trump has yet to be in touch with him or others about their criticism of the Iran nuclear deal. Yukiya Amano, the director-general of the International Atomic Energy Agency, told The Associated Press that his organization was “in constant touch” with the US, but had yet to hear from the new administration on their concerns. “I’m expecting to have direct contact with the new administration very soon,” Amano said. Trump has signaled he wants to take a harder line on Iran than his predecessor Barack Obama, for whom the deal reached between Iran and world powers was a major foreign policy achievement. Trump included Iran in his travel ban affecting seven Muslim-majority countries. During his campaign, Trump said he wanted to renegotiate the Iran deal, without elaborating. The White House could not be immediately reached for comment.

Amano said the Iranian government also had yet to reach out on Trump’s comments, though it remained in touch with UN atomic officials. He mentioned his trip in December to Tehran, in which he met President Hassan Rouhani and others. “Why not meet again in the near future?” he added. In response to the US Congress extending some sanctions on Iran, the country announced in December it would draw up plans to build nuclearpowered ships . The nuclear deal allows Iran to conduct peaceful atomic research. Iran’s mission to the UN did not immediately respond to a request for comment Tuesday. But a spokesman for Iran’s atomic energy organization suggested Trump’s comments prove the nuclear deal is good for Tehran. “Trump has considered the deal the worst deal in the history of the United States, so it should be known that the deal was a successful one for Iran,” Behrouz Kamalvandi was quoted as saying by the state-run IRNA news agency. The accord limits Iran’s ability to enrich uranium in exchange for the lifting of economic sanctions. Western powers struck the deal in order to deny Iran the ability to quickly develop nuclear weapons. Iran insists it has never sought nuclear arms. Amano, in Dubai as part of the annual World Government Summit, said Iran had yet to be in touch with him or any of his officials about their own concerns over the posture of Trump’s administration.