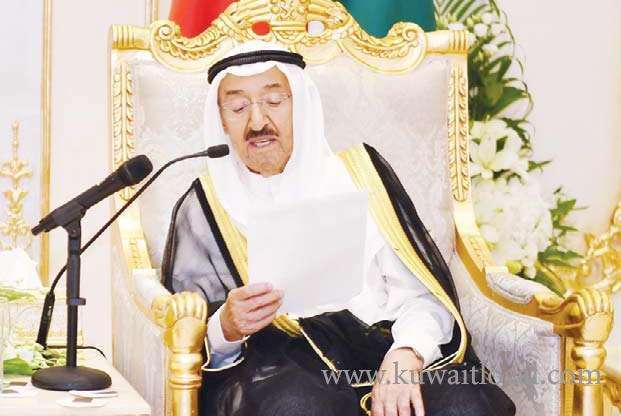 In his call, His Highness the Amir denounced the sabotage acts and hoped the investigations launched by the UAE authorities would reveal the perpetrators of those acts that threaten the maritime navigation, international trade, and world energy supplies. His Highness the Amir wished the UAE and the whole region everlasting stability and security. Saudi Arabia said armed drones had struck two oil pumping stations in the kingdom on Tuesday in what it called a “cowardly” act of terrorism two days after Saudi oil tankers were sabotaged off the coast of the United Arab Emirates.

The energy minister of the world’s largest oil exporter said the attack caused a fire, now contained, and minor damage at one pump station, but did not disrupt oil production or exports of crude and petroleum products. Oil prices rose on news of the attack on the stations, more than 200 miles (320 km) west of the capital Riyadh. Brent was trading at $71.07 a barrel by 1347 GMT, up 1.20%. Energy Minister Khalid al- Falih, in comments run by state media, said the drone attack and Sunday’s sabotage of four vessels, including two Saudi tankers, off Fujairah emirate, a major bunkering hub, threatened global oil supplies.

“These attacks prove again that it is important for us to face terrorist entities, including the Houthi militias in Yemen that are backed by Iran,” Falih said in an English-language statement issued by his ministry. Houthi-run Masirah TV earlier said the group had launched drone attacks on “vital” Saudi installations in response to “continued aggression and blockade” on Yemen.

A Saudi-led coalition has been battling the Houthis for four years in Yemen to try to restore the internationally recognised government, in a confl ict widely seen as a proxy war between Saudi Arabia and Iran.

The Houthis have repeatedly launched drone and missile attacks on Saudi cities, but two Saudi sources told Reuters this was the first time an Aramco facility was hit by drones. State-run Aramco said it had temporarily shut down the East- West pipeline, known as Petroline, to evaluate its condition.

The pipeline mainly transports crude from the kingdom’s eastern fields to Yanbu port, which lies north of Bab al-Mandeb. The attacks occur amid a war of words between Washington and Tehran over sanctions and US military presence in the region. Iraqi Prime Minister Adel Abdul Mahdi said on Tuesday that neither the United States nor Iran want war, adding that Iraq is in contact with both, state news agency INA reported.

The US ambassador to Saudi Arabia said Washington should take what he called “reasonable responses short of war” after it had determined who was behind attacks on oil tankers off the coast of the United Arab Emirates. Iran was a prime suspect in the sabotage on Sunday although Washington had no conclusive proof, a US official familiar with American intelligence said on Monday. Iran has denied involvement.

Information about Partial Lockdown,Isolation,Phases and Excluded Areas from isolation Cabinet Meeting Decissions, between every phase there will be three weeks gap Phase 1 =  Kuwait turns to partial curfew from 6 PM to 6 AM = Cabinet decided to place new districts in iso... May 28, 2020 0 14154 Category: Lockdown

Air Ticket Prices Will Increase … But Won’t Be Exorbitant Jazeera Airways Board Chairman Marwan Boodai confirmed that prices of air tickets will increase in the coming period, but he was quick to add the prices will not be exorbitant; while traveling befor... May 26, 2020 0 9231 Category: Travel

NRI’s Can Leave India With Strict Conditions As India’s repatriation exercise continues, the Union home ministry has now outlined stringent protocols for non-residential Indians to return to their destination countries. While the Centre... May 28, 2020 0 6777 Category: India

Kuwait Airways to Lay off 1500 Expat Employees The senior management of Kuwaiti Airways is planning to end the services of 1500 expats out of a total of 6000, according to a local daily. However, Kuwaiti citizens past the age of sixty will be exem... May 28, 2020 0 6237 Category: Kuwait

Kuwait To Restore Normal Life After May 30.. Kuwait government will not extend full curfew due to end Saturday, May 30 and will turn to partial curfew to pave way for restoration of normal life, Deputy Premier and Interior Ministry Anas Al-Saleh... May 25, 2020 0 5233 Category: Coronavirus

Filipino Infected With Coronavirus Jumps From 3rd Floor A Filipino infected with coronavirus committed suicide by jumping out of the window of his apartment located on the third floor of a building in Al-Farwaniya area. A security source stated that the... May 28, 2020 0 4549 Category: Coronavirus

16 Flights From Kuwait To India From May 29th to June 7th - Vande Bharat Mission Ministry of External Affairs release: Please note :- This is a dynamic list and is bound to undergo changes based on operational, technical and other considerations. The list should not be considered ... May 26, 2020 0 4440 Category: India

Sri Lankan Woman Arrested For Insulting Kuwait Securitymen of Cyber Crime Dep. have arrested a Sri Lankan woman who appeared in a video on social media insulting Kuwait's decision to take steps to prevent the spread of coronavirus and the Kuwa... May 28, 2020 0 3940 Category: Crime News
Popular Videos