Advanced Search
Filippina Baby Born On Board Made An Emergency Landing In Hyderabad India
Category: International 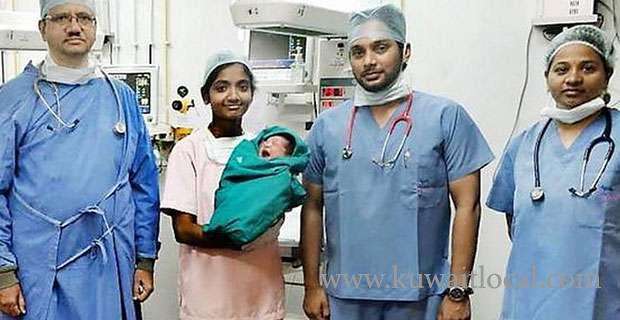 An emergency landing was conducted after a Filipina woman delivered a baby girl while on board. The plane landed at Rajiv Gandhi International Airport, Shamshabad. The delivery of the baby took place in the wee hours of May 8 and the mother and daughter were brought to the Apollo Cradle, Jubilee Hills with the umbilical cord still intact.

Reportedly, the woman works in Saudi Arabia and currently in her 35th week pregnancy, just three weeks away when she traveled back to the Philippines.

However, by the time she boarded the plane bound to Manila, she started to feel labor pains. Three doctors and two nurses from Apollo Cradle, Jubilee Hills went directly to the airport upon receiving a distress call around 2 in the wee hours of the morning. They reached to the airport before the aircraft even landed.

By the time they reached the aircraft, the woman is already in an advanced stage of labor, prompting them to perform the delivery inside the airplane, behind a row of seats.

As for the newborn baby, she is at the Newborn Intensive Care Unit (NICU) and weighs 3.2 kg at birth.

The hospital further confirms that the baby was provided with medical support and is now fit to travel.

Flights To India Awaiting Final Approval Special charter flights to Indian destinations are expected soon with the signing of the Transport Bubble between the two countries, a reliable source disclosed to The Times, Kuwait. It is expected... August 05, 2020 0 15726 Category: Information

The Airport Continues Its Commercial Flights According to Alqabas Kuwait International Airport continued to operate commercial flights for the fifth consecutive day, as 14 flights arrived in the country yesterday, while 16 flights departed. A re... August 06, 2020 0 7098 Category: Travel

2,800 Departures And 1,470 Arrivals Within Two Days According to Alqabas Director of the General Administration of Civil Aviation M. Yousef Al-Fawzan revealed that the agencies operating at Kuwait International Airport have succeeded in implementing th... August 04, 2020 0 5814 Category: Travel

Emirates Gets All Set To Relaunch Kuwait Services Dubai carrier also confirmed Lisbon as another destination being added in this rollout Emirates airline will resume passenger services to Kuwait’s capital from August 5. Flights from Dubai to K... August 05, 2020 1 4799 Category: Travel

KTTAA chairman criticizes abrupt decision to ban expats from 31 countries without prior notice Under the pandemic situation the decision was taken by Kuwait government to ban travel from 31 countries. Today Mohammad Al-Muthairi, the Chairman of the Board of Directors of the Kuwait Travel and To... August 05, 2020 0 4426 Category: International

Travel Packages For Expats Who Are Willing To Return From 31 Banned Countries Considering the current Pandemic situation all over the world,Kuwait has banned travel from 31 countries, so expats cannot return back to Kuwait from banned countries. Travel agencies are taking th... August 04, 2020 4 4258 Category: Travel

19 Dead and 127 Injured after Air India flight crashlands in Kozhikode, breaks into two 19 passengers died and 127 were injured, including 15 seriously, when a plane coming from Dubai met with an accident at Karipur airport in Kozhikode, Malappuram Superintendent of Police (SP) said on F... August 07, 2020 0 3832 Category: India

3 Stage Plan For Return of Expats - MOI High sources revealed Alqabas  that the return of residents to the country will take place according to 3 successive stages, during which priority will be according to the needs of the state, wit... August 07, 2020 0 3797 Category: Expats

Partial Ban Lifting Is Possible, But It Will Not Take Place Today Governmental sources revealed to Al-Qabas that the cabinet will discuss in its meeting today the health indicators of the Corona epidemic and its extent locally and globally, and accordingly will dete... August 03, 2020 0 3557 Category: Coronavirus