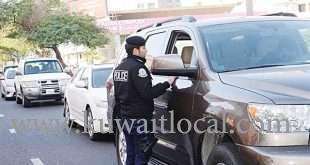 Interior Minister Sheikh Khaled Al-Jarrah Al- Sabah recently announced a decision to impose harsher penalties on those who violate traffic regulations in a bid to guarantee the safety of road users. According to the decision, the vehicles of those caught using mobile phones by hand while driving and those not wearing seat belts will be impounded for two months.  In addition, all vehicles parked on sidewalks and no-parking areas, as well as those blocking traffic movement, will be towed away and kept by the relevant authorities for two months.

The decision also stipulates establishment of a special traffic department in Salmiya to deal with drivers who will be summoned by traffic police once caught speeding by the camera. The vehicles of such offenders will be confiscated for two months as well.

The ministry decided to intensify public awareness campaigns and impose harsher penalties on reckless drivers in order to address deficiencies and abuses on roads, which have gained unwanted notoriety as chaotic and dangerous in the absence of proper driving culture and full compliance with rules and regulations.

The concerned officials have repeatedly warned that clear instructions were issued to adopt zero-tolerance policy towards anyone who breaks the law.

Citizens booked for breaking traffic rules were asked to pay fines and prevented from using their cars for some time, whereas expatriate counterparts were warned that they will be deported.

In a related development Assistant Undersecretary for Traffic Affairs Major General Fahad Al-Shuwai’e issued firm instructions to all traffic officers to take strict action against motorists who do not wear seat-belts and those who use their mobile phones by hand while driving. Sources clarified that the use of headphones does not mean a citation will not be issued.

On the other hand, sources revealed the General Traffic Department (GTD) has launched a mechanism for testing sports cars before issuing licenses. A committee will be responsible for inspecting sports cars instead of a single examiner.

The department has allocated two days in a week for checking sports cars at the Capital Traffic Department. The chassis and color will be carefully examined to ensure they are in line with the registered information. In case the car has additional accessories, the owner will be ordered to remove them before obtaining a license. If the car does not pass inspection, license will not be issued.