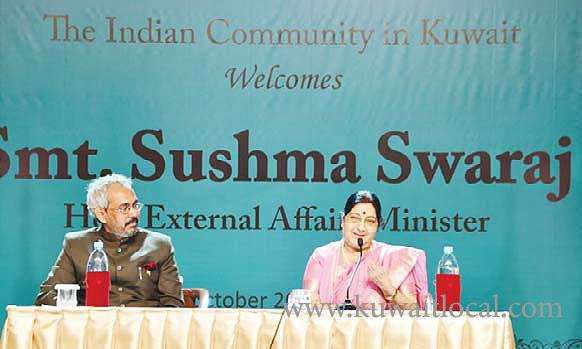 During the meeting Smt Sushma Swaraj exchanged views on furthering cooperation on various issues between India and Kuwait.

Later today she was expected to call on HH the Prime Minister Sheikh Jaber Al- Mubarak Al-Sabah and was also expected to meet the Parliament Speaker Marzouq Al-Ghanim and her Kuwaiti counterpart Sheikh Sabah Al-Khaled Al- Sabah. Earlier yesterday Smt Swaraj, who is visiting the country for the first time, had assured the Indian community that she will be discussing various issues faced by the Indian community in Kuwait during her meeting with the Amir.

When the minister met with representatives of the Indian nurses who are facing problems with their recruitment in Kuwait she has assured them that the problem will be discussed at the highest level during her meeting today.

She disclosed, around eighty Indian nurses who were recruited to work for the Kuwait’s Ministry of Health (MoH) two and- a-half years ago are ‘suffering’ because they have yet to be appointed although they were recruited by the MoH officials from India. At the heart of the issue is believed to be what some call ‘corruption’.

Although the nurses have been given accommodation by the authorities, they have neither been ‘employed’ nor paid their salaries as per the terms of the agreement.

This is in addition to the issues of the Indian engineers to find a lasting solution. This she disclosed during an interaction with the Indian community at the Indian embassy after arriving Kuwait from Qatar.

Smt Swaraj disclosed, “The two major issues which came to my notice during this trip are that of the Indian engineers’ degree recognition and that of the Indian nurses who are recruited to Kuwait Ministry of Health but not yet given the job appointment. I will be discussing both these issues tomorrow (Wednesday) during my meeting with His Highness the Amir and the Prime Minister to find a lasting solution.”

The External Affairs Minister, who is on a two-day official visit to Kuwait, was earlier welcomed by the Indian Ambassador His Excellency K. Jeeva Sagar.

On another issue, Smt Swaraj said the Indian government has taken serious steps to punish fake recruiting agencies back home and has given clear instructions to chief ministers of all states to be vigilant, particularly fake agencies sending workers to the Gulf countries. “The first priority for my ministry is to address the issues of Indian workers abroad than forming the foreign policies,” Sushma Swaraj said, who is popular for her Twitter use to help the Indian people in distress abroad.

“Relief is just one tweet away for the 3.9-million bluecollared workers here. You can express your grievances in 140 characters and we are there 24/7 for you. There is a category for SOS tweets, which I see after I finish my work. I immediately inform the ambassadors about your issues and I am happy that our ambassadors are so sensitized, that the respondents later tell me that your ambassador contacted us. We are working round-the-clock to address all of your issues,” she disclosed. The minister also praised the strong Indo-Kuwait relations.

She went on to laud the Indian Diaspora for their contribution to Kuwait’s economy and elsewhere across the world. Some community members also brought to her notice various issues including the delayed degree verification, lack of higher education facilities in Kuwait for the Indian community, etc and the minister responded by saying her ministry is taking various steps to address these grievances.

She reiterated India is the fastest growing economy in the world and the country has recently jumped 42 positions in the ‘Ease of Doing Business’ rankings. “It is the best time to invest” in India, she stressed. As a mark of respect for the Father of the Nation Mahatma Gandhi she garland the Gandhi statue at the embassy premises before entering the auditorium. The embassy also organized a cultural performance to receive the minister.