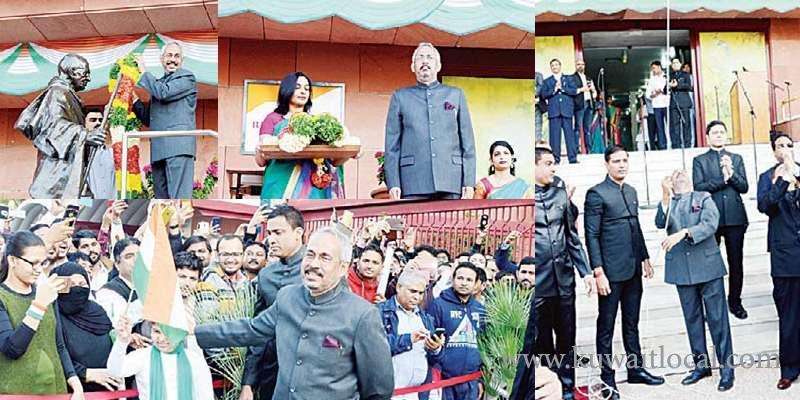 Unfurling the Indian ‘Tricolor’ at the Indian Embassy in Kuwait on the 70th anniversary of India’s Republic Day, the Indian Ambassador to Kuwait His Excellency K. Jeeva Sagar conveyed his warm greetings and best wishes “to all my fellow Indians.

I would specifically like to take this opportunity to express my deep appreciation and gratitude to all the friends and well-wishers of India in Kuwait, particularly the leadership, the people and the government of Kuwait, for their steadfast commitment to the continued close and friendly relations between India and Kuwait.”

More than 3,000 Indians representing various Indian associations, businesspersons, doctors, engineers and even domestic workers in addition to the embassy staff with their family members, participated in the event with great joy and enthusiasm.

The schoolchildren set alight patriotism in every individual with songs, dances and scintillating performances, which was the highlight of the function. Addressing the large crowd at the embassy grounds, the Indian Ambassador to Kuwait His Excellency K. Jeeva Sagar, said, “I would like to reiterate that the government of India reciprocates this commitment and is keen to further strengthen and expand this mutually enriching relationship.”

He called the India-Kuwait relations multi-dimensional, anchored in people-to-people affinities, which is the sign of their enduring nature – the bilateral relationship between two countries that is rooted in history based on a solid foundation.

“The Constitution of India has beautifully defined and encapsulated the principles and foundations of an amazing story of hope and success. It is a matter of pride for every Indian to be part of this continuing saga. The preamble of the Constitution of India begins with the words “We the people”, and over the years since the inception of the Constitution, India faced many challenges but always emerged victorious deriving inspiration from the values laid down by the Constitution. India is a pluralistic and inclusive society that takes pride in its unity in diversity. We are a nation that celebrates diversity and human dignity,” he added.

“India’s external policy has always aimed at creating an environment of peace and security in which the world can be a better place for entire humanity to live with dignity and in prosperity. Our foreign policy is focused on a broad range of global issues that serve the larger interests of humanity. We work with other countries to tackle issues of common concern such as international terrorism, climate change, energy security, food security, and the reform of multilateral institutions, including the UN.

Leader
“India,” he said, “continues to be a global growth leader, maintaining its position as one of the fastest growing large economies, with the present government of India undertaking various major initiatives by positioning India as a global design and manufacturing hub (Make in India), leveraging on the favorable demographic dividend (Skill India), by continuous simplification of regulations and reduction of administrative barriers with the use of technology driven programs (Digital India, Smart Cities, Model Villages).

“It’s no wonder that India today, boasting of an open investment climate and an improved business environment (record FDI inflows and unprecedented rise in Ease of Doing Business rankings stand testimony to this fact), offers huge investment opportunities for the global industry and business. “Year 2018 has been a significant year for India-Kuwait relations.

The highlight of the visit was her call on His Highness the Amir during which the two sides took considerable satisfaction in the issue-free, extremely friendly and historical relations between India and Kuwait.

“His Highness was generous in his appreciation for the Indian community living in Kuwait and their impressive contribution to the socioeconomic development of Kuwait. “India has consistently been among Kuwait’s top trading partners and the total annual bilateral trade has now crossed $8.5 billion. Indian Public Sector Undertakings such as Air India, Life Insurance Corporation of India, etc, along with several other large Indian companies including Larsen & Toubro, Shapoorji Pallonji, Punj Lloyd, Essar, Simplex Project Ltd, Tata Services India Ltd etc, among others, have been actively present in Kuwait,” he said.

The Indian envoy went on to say, Indians in Kuwait, which is present in almost all segments of Kuwaiti economy, have been playing a major role in the constantly growing upward trajectory of India-Kuwait relations. The welfare and well-being of the Indian community in Kuwait has always been and will continue to be among the highest priorities of the embassy.

It will be this Mission’s endeavor, in cooperation with the Kuwaiti authorities, community associations, and well-wishers and volunteers of the community, to address all issues and ensure the welfare of the Indian community in Kuwait so that it can continue to provide a strong impetus to India- Kuwait relations, he said.