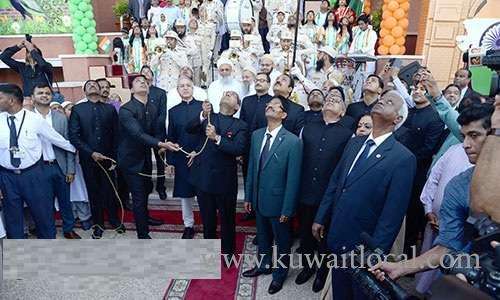 Despite the hot weather, large number of Indians gathered at Indian Embassy premises here in Kuwait early morning to pay salute to the nation on the 70th anniversary of India's Independence day. More than 3000 Indians attend the celebration, which was filled with patriotic ambiance. Ambassador of India, HE Mr. Sunil Jain unfurled the National Flag at 8:00 am. Ambassador Sunil Jain garlanded the Mahatma Gandhi statue at the embassy premise before unfurling the flag. This was followed by singing of the National Anthem by all. Ambassador addressed the community and read the message from Hon’ble President of India.

The Ambassador extended his warm greetings to all members of the Indian Community in Kuwait and also conveyed his best wishes to His Highness the Amir, His Highness the Crown Prince, His Highness the Prime Minister, as well as the people of the friendly state of Kuwait with which India enjoys a close multi-faceted relationship. In his speech he mentioned that Indians are the largest community in Kuwait and reiterate the community to obey the rules of the land in all aspects. Ambassador told that the Minister of State for External Affairs Sri M J Akbar will visit Kuwait next month to strengthen the bilateral relationship. He also mentioned the recent private visit of His Highness the Amir to India during his speech. He said that this shows the love towards our country by Kuwait. Mr. Sunil Jain also urged all community members to come forward with any suggestions which can improve the service of Indian Embassy.

Despite the hot weather, thousands of Indian citizens from all walks of life including representatives of Indian associations, businessmen, doctors, engineers, other professionals, laborers, domestic workers and Embassy staff with their families participated in the open-air function with joy and enthusiasm.

To commemorate India’s Independence Day, various newspapers in Kuwait released special supplement and distributed free copies at the embassy premise. IndiansinKuwait.com published special online supplement for the occasion. IIK Special supplement carries exclusive articles written by our readers for the Independence Day and is available online at http://www.indiansinkuwait.com/IDay. The Tricolor caps distributed by IndiansinKuwait.com provided solace to the crowd in the scorching heat.