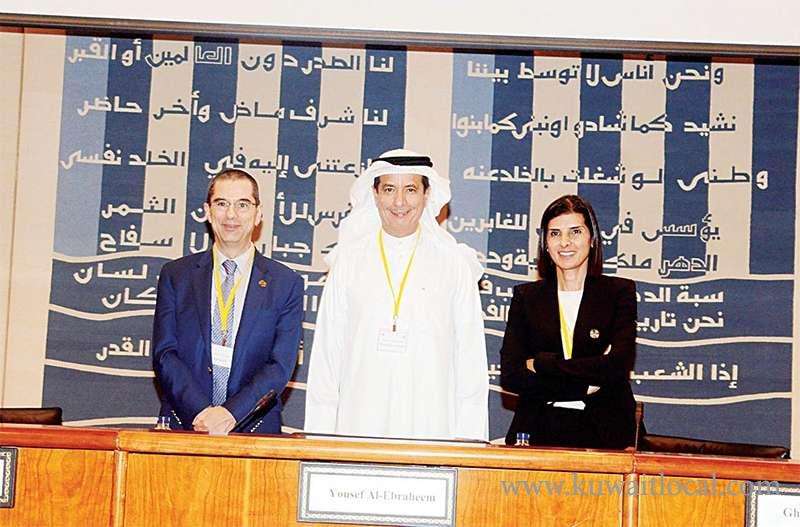 The IMF Middle East Center for Economics and Finance (CEF) in Kuwait, jointly with the Arab Fund for Economic and Social Development (AFESD), held a high-level symposium on “Public Sector Reforms for Better Governance” on Monday, at the Arab Fund’s Headquarters with speakers discussing the topic from an international perspective as well expounding on local efforts.

The panel discussion was chaired and moderated by HE Dr Yousef Al-Ebraheem, Economic Advisor at Al-Diwan Al-Amiri and included as speakers Vitor Gaspar, Director of the lMF’s Fiscal Affairs Department and Ghada Khalaf, Project Manager of the Government of Kuwait’s Restructuring Project.

The event was attended by representatives from the public sector, the banking and business community, academia, as well as representatives from international organizations and civil society. Dr Al-Ebraheem stated that the symposium aimed at stimulating an open debate on the evolving economic challenges faced by policymakers in Kuwait and the wider Arab community.

“The role of governments in any economy is paramount and essential regardless of the economic growth or system, or whether it is an operator or regulator in the economy. Governments will continue to be major forces in the economy. Public sector reform is an important and continuous process in capturing rising opportunities and overcoming economic challenges.”

He continued, “In the Arab world, the reforms are still very slow and vary among countries depending on political will and economic circumstances. Core measures are needed to strengthen fiscal institutions through efficiency, transparency and accountability. Another major challenge facing governments everywhere is the sweeping anti-establishment movement as a product of mistrust in government and public sector policy.”

In her presentation, Ghada Khalaf, reiterated HH the Amir, Sheikh Sabah Al-Ahmad Al-Jaber Al-Sabah’s desire to reform Kuwait’s government administration as envisaged in the New Kuwait Vision 2035. She shared that, based on HH The Amir’s vision, the Supreme Council for Planning and Development commissioned a study on “Redesigning the Structure of the Government of Kuwait”.

In accordance with this decision, which was endorsed by the Council of Ministers, the General Secretariat of the Supreme Council for Planning and Development (GSSCPD) launched a strategic initiative under the public administration pillar within New Kuwait Vision 2035. As the Kuwait Foundation for the Advancement of Sciences (KFAS) collaborates closely with GSSCPD to bring together scientific and evidence-based perspectives to policymaking, the project leverages and builds on KFAS‘ partnerships with renowned universities and international research institutions as well as its network of local subject matter experts.

She noted that there is an urgent need to transform the current government of Kuwait to adapt to the fast changing global economy and pointed out that the objective of the restructuring is to create an effective public administration and to reinforce transparency, accountability and efficiency in the government. She revealed that the project aims to do so by changing the role of the government from an operator to a policy maker, increasing private sector participation and driving economic growth, adopting a government structure that is better coordinated, lean and efficient by optimizing manpower, streamlining governance and achieving budgetary savings, and finally enacting a service delivery model that is citizen-centric and digitally-enabled to increase citizen’s satisfaction and enabling datadriven decision making. She informed that the project is structured in three stages. “We are currently at the end of Stage 1 – Assessment and Benchmarking. This stage is critical because its inputs will go into the second stage to be used to develop a proposal for the structure of the government of Kuwait and then the third and final stage deals with formulating an implementation plan for the government to respond to. The project is expected to end by May 2020.”