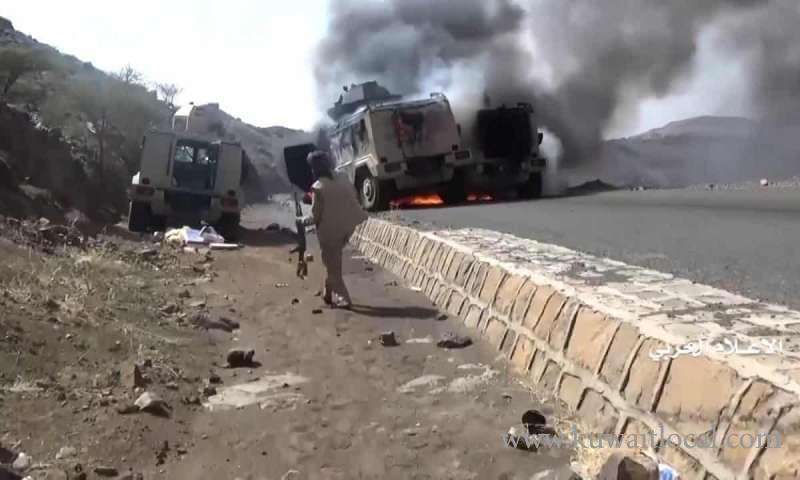 Houthi rebels in Yemen say they have killed 500 Saudi soldiers, captured a further 2,000 and seized a convoy of Saudi military vehicles.

The extraordinary claims at a press conference on Sunday, involving still photographs and inconclusive videos of captured soldiers, many not in uniform, could not be corroborated, and there was no independent confirmation from Saudi Arabia.

The Houthis, showing pictures of upturned Saudi vehicles and immobilised convoys, claimed the attacks had occurred over the past three days in the southern Najran region of Saudi Arabia, which borders Yemen, and would continue with greater intensity.

“Operation Victory from God is the largest military one since the brutal aggression began. The enemy suffered heavy losses … and wide swathes of territory were liberated in only a few days,” said the Houthi spokesman, Mohammed Abdul Salam.

He also claimed hundreds of Saudi soldiers lay dead or injured on the battlefield, and Riyadh had little option but to consider how to withdraw. He said the Houthis would end their attacks if the Saudis took reciprocal measures.

The attacks, if verified, would be a remarkable show of force inside Saudi Arabia and mark another embarrassment for the kingdom, after its US-made Patriot missile defence system failed to protect two Saudi Aramco oil sites from an attack by drones and cruise missiles earlier this month.

On Saturday, the Houthis claimed they had captured three Saudi brigades – a major proportion of the kingdom’s army. The group also says it was responsible for the oil attacks, but this has been disputed by western and European governments.

A Gulf coalition, led by Saudi Arabia, intervened in Yemen in March 2015 on behalf of the internationally recognised government after the Houthis ousted Abd Rabbu Mansour Hadi in a coup as they seized the capital, Sana’a.

It was reported over the weekend that Saudi Arabia had agreed to end its bombing campaign in some parts of Yemen in an attempt to kickstart political talks on the country’s future.

Western diplomatic sources have confirmed a limited Saudi offer to restrict its bombing campaign to some regions and exchange prisoners is imminent. The United Arab Emirates pulled some of its troops out of Yemen earlier this year after deciding there was no possibility of an outright military victory.

A week after the attack on the Saudi oil sites, the Houthis surprisingly offered to end drone strikes in Saudi Arabia.

The UN security council welcomed the announcement and hinted at a process that might lead to discussions on a future political settlement.

Current talks between Houthis and the UN-recognised government of Yemen are confined largely to mutual troop withdrawals from the Red Sea port of Hodeidah and measures such as prisoner releases.

In a statement issued last week, the security council described the Houthi offer as “an important first step towards de-escalation, which will need to be followed with positive action on the ground by the Houthis as well as restraint by the coalition”.

The security council also gave its full support to a plan floated by Martin Griffiths, the UN special envoy for Yemen, to hold informal consultations with Yemeni political actors and establish an advisory group in preparation for the resumption of formal negotiations.

In a statement, the group called on the parties in Yemen to “engage constructively with the special envoy to resume inclusive and comprehensive political discussions which can end the conflict”.