<![endif]-->
Advanced Search
His Highness the Amir congratulated the citizens and residents of the country on the 56th anniversary
Category: Kuwait 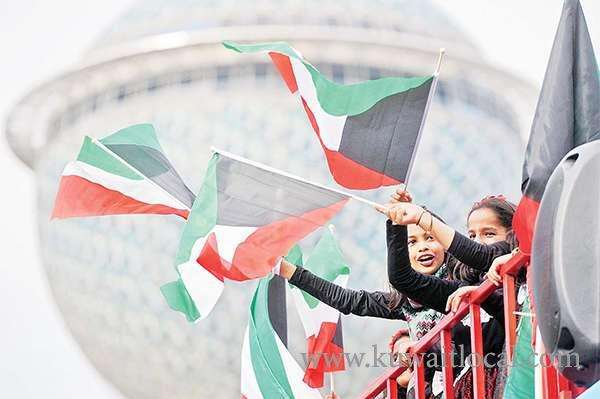 His Highness the Amir expressed appreciation for jubilation manifestations made by the nationals and the residents on these two dear national occasions, through their participation in the celebratory festivals held throughout the country. He lauded the civic conducts “that made everyone happy thus depicting the Kuwaiti family spirit; that is a spirit of compassion and solidarity,” HH the Amir urged everybody to be thankful for the heavenly blessing, the liberation of “our dear homeland, as well as the blessings of security, safety, stability and prosperity …”

His Highness the Amir called for sincere and constructive action to serve the dear homeland, marshalling up all potentials for its development, promotion and prosperity. He lauded the wide-scale coverage of the festivities by the official and private media, thus promoting the great efforts exerted by the Ministries of Interior, Defense, the National Guards, to secure a comfortable atmosphere for the revelers.

Praises
He also heaped praises on the departments that joined efforts in arranging the celebrations. His Highness the Amir Sheikh Sabah Al-Ahmad recalled on the occasions the martyrs who deemed the homeland with their pure blood praying for heavenly blessing for their souls. He also thanked leaders of the other GCC states and Arab countries who expressed good wishes during Kuwait’s celebrations, expressing good wishes to them and their nations.

Moreover, he received similar cables from ministers, governors, senior state officials, diplomats, lawmakers, citizens and expatriates. Sheikh Nawaf reciprocated expressing deep gratitude, underlining faithfulness of the Kuwaiti people namely achievements that have been made by the youth in diverse spheres. He recalled sacrifices of the martyrs who had given their souls for safeguarding Kuwait. In a similar vein, lawmakers congratulated His Highness the Amir, His Highness the Crown Prince, His Highness the Prime Minister Sheikh Jaber Al-Mubarak Al-Hamad Al-Sabah, Speaker Al-Ghanim, members of the Parliament, ministers, citizens and expatriates on the occasion of the National and Liberations days. On his Twitter account, Al-Ghanim posted, “I extend my congratulations and blessings to HH the Amir, HH the Crown Prince and the people of Kuwait on the occasion of the national holidays. May we feel the sense of gratitude from our brothers in the GCC and friendly countries. May the Almighty have mercy on our righteous martyrs and bless our country with security and stability.” On the other hand, the lawmakers stressed the need to take advantage of these national festivities to strengthen national unity, avoid instigating sectarian conflicts, learn valuable lessons from these events, and promote compassion and community service.

MP Mohamed Al-Huwailah pointed out these glorious national events, which coincided with the 11th anniversary of the Amir’s taking the reins of leadership and 11th anniversary of the appointment of HH the Crown Prince, are precious to the people of Kuwait. He prayed that Allah, the Almighty, continues to bless the State of Kuwait and its people with security, safety and stability. He added they cannot let this occasion pass without remembering the martyrs who sacrificed their lives for the homeland, imploring the Almighty to have mercy on them.

MP Askar Al-Enezi asserted that after the liberation of Kuwait from the brutal invasion, it began to regain its position among Arab countries as well as those in the region and other parts of the world. He stressed the regional and international stature of Kuwait came after the Amir rose to power — a manifestation of the prestige and wisdom of His Highness among world leaders. MP Talal Al-Jalal underscored the need to strengthen national unity as it is the safety valve for the people in facing any challenge. He also called on everyone to avoid everything that stirs sectarianism. MP Khalil Saleh urged everybody to learn from these anniversaries, indicating that national events are considered a chance to promote compassion and community service. He hopes the State agencies will take this opportunity to support and strengthen national unity.

MP Faisal Al-Kandari said, “These events are dear to our hearts and the people of Kuwait always support the political leadership. Citizens proved their unity during the invasion as we stood behind our leaders.” He also emphasized the importance of coordination between the legislative and executive authorities to better serve the people and realize their ambitions. Meanwhile, the parliamentary Interior and Defense Committee will discuss on Monday a number of proposals such as prohibiting withdrawal of citizenship unless it is done through a court ruling, and amending the offender and citizenship laws. The committee is expected to refer these bills to the National Assembly for voting soon.