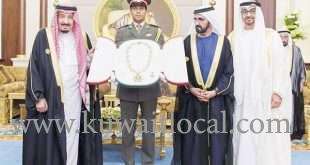 His Highness the Amir Sheikh Sabah Al- Ahmad Al-Jaber Al- Sabah, on eve of a scheduled visit to the country by the Saudi King, expressed overwhelming pleasure for the forthcoming event that depicts the brotherly ties between the two Gulf States.

The Amiri Diwan, in a statement, quoted His Highness the Amir as warmly welcoming the Saudi Monarch and Custodian of the Two Holy Mosques, King Salman Bin Abdulaziz, and the officials who would accompany him during the visit to the country, “where they will be guests in their second home, among their families and brothers.” This graced visit clearly reflects the good and brotherly bonds between the two countries’ leaderships and peoples that have stood together in face of hardships and dangers, His Highness the Amir stated.

His Highness the Amir lauded the historic and pivotal role, played by the Saudi leadership and people in support of the Kuwaiti cause, namely the flagrant “Saddami aggression” in 1990, alluding to the invasion of the country by forces of the ousted and executed Iraqi ruler, Saddam Hussein. He recalled in this context bravery of the Saudi forces that had taken part in the epic liberation of the country.

Elaborating, His Highness the Amir in his statement welcoming the Saudi Monarch, noted the great achievements that have been made during King Salman’s era, bolstering the Kingdom’s regional and international status. He also hailed King Salman’s firm and brave policies at the Arab and Gulf levels and his foresightedness for bolstering regional security, peace and prosperity.

His Highness the Amir said he is looking forward to this “exemplary and distinctive visit, forecast to result in further cementing of the distinguished” ties between the two GCC countries.