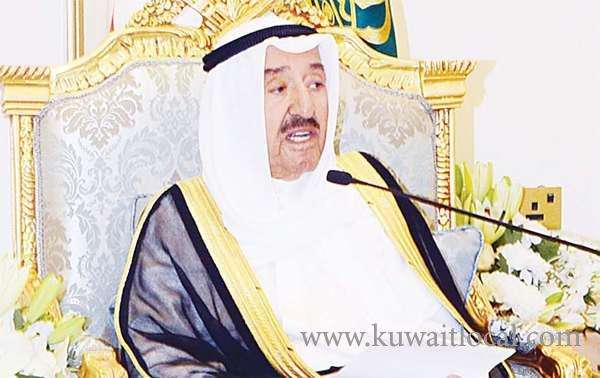 The Parliament on Tuesday organized a meeting at the Parliament Office to discuss the current situation in the region, escape of Abdali cell convicts, security and public money issues.

His Highness the Amir Sheikh Sabah Al-Ahmad Al-Jaber Al-Sabah has urged MPs to shoulder responsibilities toward national unity, abstain from meddling in Kuwait’s ties with regional states and support the State’s mediation to resolve the Gulf crisis, the Parliament Speaker announced.

Marzouq Ali Al-Ghanim, speaking to reporters following a scheduled meeting that groups MPs with Government officials at the Parliament Bureau on Tuesday, said he conveyed a letter from His Highness the Amir to the legislators during “the very positive meeting,” attended by five ministers and some 28 deputies.

“I presented to the meeting the message from His Highness the Amir in which he signaled the critical and extraordinary regional circumstances,” emphasizing that the MPs must shoulder their responsibilities and refrain from getting involved in Kuwait’s external ties with regional States, he said.

His Highness the Amir, Speaker Al-Marzouq added, urged the lawmakers to shoulder the national responsibility of safeguarding national unity and abstaining from action that might cause disarrays among the people.

A lot of information can neither be publicized nor explained to the public, “however His Highness is well aware of the hazards and fears preoccupying the MPs and the Kuwaiti people,” he said.

In response, the Assembly members affirmed their commitment to preserving the society unity and pledged not to make inflammatory statements.

The National Assembly Speaker has expressed pride of the Kuwaiti people who enjoy significant freedoms and democracy, “yet at hard times we close ranks behind our political leadership.” Al-Marzouq added that First Deputy Prime Minister and Foreign Minister Sheikh Sabah Khaled Al-Hamad Al-Sabah spoke about regional issues, Kuwait’s mediation among GCC countries, hoping that His Highness the Amir’s efforts would result in tackling the inter-GCC rift.

Meanwhile, Minister of State for Cabinet Affairs Mohammed Abdullah Al-Mubarak Al-Sabah considers the meeting a positive development.  He said they discussed the steps taken by the government regarding Abdali cell.

Chairman of the Foreign Affairs Committee in the Parliament MP Ali Al-Daqbasi expressed satisfaction over the government’s action concerning Abdali cell.  He revealed that the lawmakers listened to the detailed explanation of the government, affirming his support for the procedures taken so far.

“We will protect Kuwait and foil attempts to destabilize the Kuwaiti society.  Some people seem bent on instigating sedition, but they have to keep in mind that the State is not powerless.  Those who question our security services are the enemies, not Kuwaitis.  We, as MPs, must shoulder our responsibilities,” he asserted.

MP Faisal Al-Kandari said Kuwait’s internal front is strong and HH the Amir always emphasizes the importance of unity in facing those who intend to destabilize the nation.  He added the legislative and the executive authorities must work together, taking into consideration the current situation in the region.

Attended by five Cabinet ministers and 28 members of Parliament, today’s session focused on regional situations, measures taken against the so-called Al-Abdali Cell and action against fugitives from justice in this case, Sheikh Mohammad Al-Abdullah, who doubles as Acting Minister of Information, told reporters.

During the meeting, the government briefed the deputies on all details it had regarding such subjects and matters, the minister said.

Sheikh Mohammad Abdullah thanked the deputies for their high spirit which helped in the success of the meeting, hoping that patriotic sentiments would prevail and that Kuwait’s security and stability would be maintained.