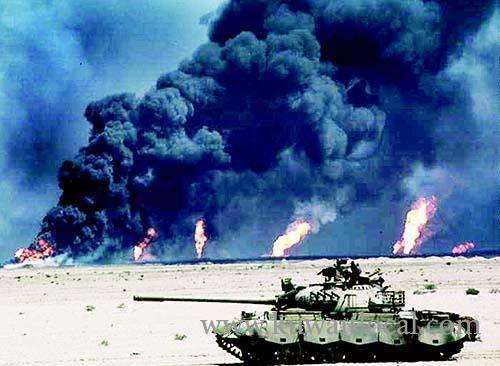 At a time when the prospect of a war in the region has increased, no government has announced an emergency plan to protect the environment from the dangers of military operations that may cause land, sea and air pollution, as well as destruction that may prolong natural environmental resources, reports Al-Qabas daily.

According to experts, Kuwait is not immune to these negative effects. The environmental experts have warned of the absence of a plan of the concerned parties through which the country could face the danger in the event of a war whose main base is the waters of the Arabian Gulf, where more than seven military vessels are anchored military equipment horded in the middle and south and east and west and the unusual movement of equipment increasing pressure on the marine environment, which has many adverse effects.

The experts pointed out that the Gulf region has witnessed three wars in a short period, which were able to destroy and obliterate many of the natural and environmental features, as well as pollution caused by all sorts of weapons and oil contaminants and drying parts of the marine environment.

The studies and environmental reports on the Gulf region have revealed the magnitude of the negative impact of the three wars on them, especially the Iraqi forces carried out a sinful attack on the coast of Kuwait by pouring and burning oil and the destruction of oil wells, which took years to clean and then save what could be saved from marine organisms facing internal pollution from rainwater drains, high temperatures and low oxygen rates, due to the firing of rockets and other military operations.

Economist Dr Nawaf al-Hajri explained that the war or military strikes may be in the shipping and loading areas in the oil ports, in oil tankers in the middle of the sea, or offshore wells near the coast, causing oil spill at one of these sites.

He explained that the oil spill may lead to economic disaster due to upheavals in maritime trade, which represents a major challenge for fishermen and the fishing trade in the Gulf, as happened in Alaska 1989. He revealed that the pollutants have the ability to move distance of 2000 or 3000 kilometers.

Pollution from the war in Kuwait, for example, may extend to the coasts of Oman and other areas, indicating that hitting one oil well may cause the deaths of tons of fish and seabirds. Professor Fatima al-Mutairi, a professor of geography at the Faculty of Social Sciences, said wars and air strikes on oil tankers are the most catastrophic events that lead to the destruction of entire ecosystems, causing heavy losses due to leaking oil that kills marine organisms, birds and mammals living in the marine environment.