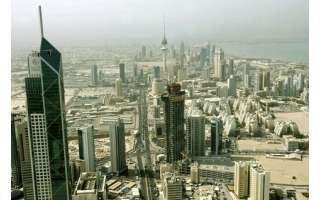 Global warming could create peaks of humid heat in the Arabian Gulf beyond human tolerance by century’s end, according to a study published Monday in the journal Nature Climate Change.

If greenhouse gas emissions continue unabated, heatwaves occurring on average once every 10 or 20 years would, by 2100, exceed the capacity of a young, healthy person to maintain a normal body temperature, the study found. Even annual summer heatwaves would become dangerous, especially for the elderly and very young, the researchers said.

“The human body regulates its core temperature to around 37 degrees Celsius (98.6 degrees Fahrenheit), and its skin to a cooler 35 C (95 F),” explained co-author Jeremy Pal, a professor at Loyola Marymount University in Los Angeles.

That difference allows us to shed excess heat, especially when the air is muggy. But if a double whammy of high heat and humidity reaches a certain level, “the body is no longer able to cool itself and begins to overheat,” Pal told journalists in a phone conference. That threshold — measured with an index scientists call “wet-bulb” temperature — would be crossed, for example, if a humidity level of 50 percent were combined with a temperature of 46 C (115 F). A slightly higher temperature with a lower humidity level, or vice versa, would have the same effect.

Without air conditioning, humans could last about six hours under such conditions before their bodies began shut down, the authors said. They pointed out that some outdoor activities — such as the Muslim pilgrimage known as the Hajj — could literally become life-threatening due to the climactic conditions. While the temperatures in Makkah and nearby Jeddah are not predicted to be the highest in the region, they would still pose a risk.

Many industrial activities — transportation, construction, agriculture, aquaculture — would also become hazardous under such conditions, the authors said. To date, no place on Earth has cross the redline of a deadly “wet-bulb temperature”. But on July 31 of this year, Bandar Mahshahr in Iran came very close, according to Christoph Schar, a scientist at the Institute for Atmospheric and Climate Science at ETH Zurich. “The consequences of major heat waves for human health has become apparent from the death toll of recent events such as those in Chicago in 1995, Europe in 2003 and Russia in 2010,” he wrote in a commentary, also in Nature Climate Change.

In France alone, there were some 15,000 excess deaths in the summer of 2003, according to government figures. Conditions in the Gulf are ideal for creating the kind of steamy cauldron that could make certain areas there close to unliveable, the researchers found. Clear blue skies and the absorbtion of the Sun’s radiation by the shallow waters of the Red Sea and Gulf combine with a concentration of water vapour hanging close to Earth’s surface,

they said. Under a “business as usual” scenario of greenhouse gas emissions, average global temperatures are predicted to rise by about 4 C (6.4 F) by the end of the century, according the UN’s top science panel. A 4 degree world would be one of extreme drought, deadly superstorms and sea level rise. Human impacts would include mass migration and the spread of disease, scientists say

5 Year Residence For Expats And 10 Years For Expat Businessmen A new residency law will be introduced that underlines that an expat can acquire a residency visa for up to 5 years and for an expat businessman with a valid project, it is for 10 years. Among the ... August 12, 2020 2 7006 Category: Expats

After Days Of Waiting, First Flight Left To India From Kuwait Today After a long wait of more than three weeks, the flight to India resumed from Kuwait international airport today with the first flight carrying 322 Indians stranded here to Delhi. The flight, arrang... August 11, 2020 0 6133 Category: Kuwait

Allow Entry To Non-Kuwaitis From The 31 Banned Countries Who Are Related To A Kuwaiti The General Administration of Civil Aviation issued a circular to airlines operating at Kuwait International Airport allowing non-Kuwaiti passengers who have a relationship with a first-class Kuwaiti ... August 09, 2020 0 4610 Category: Travel

Steps To apply for Renewal of Kuwait Society Of Engineers (KSE) Membership And No Objection Certificate Online If you hold a engineer visa KSE membership is must and you have to renew it Every Year, Below we will explain the process about renewal KSE membership and applying NOC, this process is for who already... August 10, 2020 0 4526 Category: Kuwait Society of Engineers

Large Scale Expat Deportation Plan In Progress Planning is underway for the large scale arrest and deportation of around 126,000 expatriates living illegally in Kuwait, reports Al Jarida daily. They did not take advantage of the amnesty in April a... August 11, 2020 1 3950 Category: Expats

Only educated expats over 60 will have their residence renewed Public Authority for Manpower (PAM) has announced that expats at the age of 60 and above, without a university degree will need to make preparations to leave the country by end of this year. They are ... August 11, 2020 2 2939 Category: Expats
Related News
Visit Visa
Visit Visa
View All
Indemnity
Indemnity
View All
Dependent Visa
Dependent Visa
View All
Driving License
Driving License
View All
Project Visa
Project Visa
View All
Termination
Termination
View All
Civil ID
Civil ID
View All
Crime News
Crime News
View All