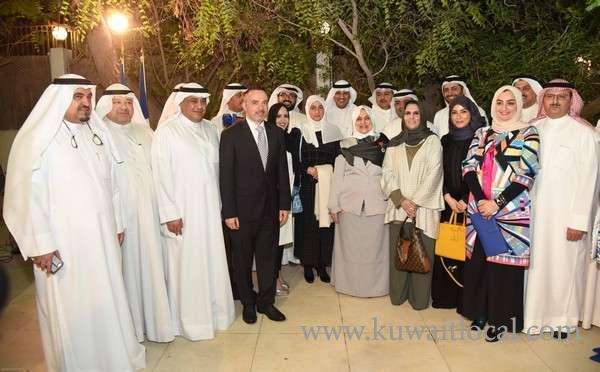 Minister of Social Affairs and Labor H.E. Hind Al Subaih was awarded the French medal of the ‘Order of the Knight’ by the Ambassador of France H. E. Christian Nakhle on behalf of the President of France, during a special ceremony held last week at the ambassador's residence. The honor was bestowed upon Al Subaih for her long and outstanding service to Kuwait as well as enhancing Kuwait- France relations.

Addressing the gathering, Ambassador Nakhle praised the distinguished service of the minister in public office over a period of 20 years and congratulated her for receiving the prestigious award from the President of France.

Al Subaih in her remarks to the guests expressed her gratitude to the French President and her pride to be the first Kuwaiti woman to be awarded with this honor. She acknowledged the support and cooperation of all the employees and colleagues for her success and reiterated that their support was a crucial part of the award. The minister then dedicated the award to H.H. the Amir Sheikh Sabah Al Ahmad Al Sabah, H. H. the Crown Prince Sheikh Nawaf Al Ahmad Al Sabah and H. H. the Prime Minister Sheikh Jaber Al Mubarak Al Sabah, and to all the people of Kuwait for their support and encouragement.

She also praised the friendly relations between Kuwait and France in all areas and hoped to further enhance the friendly relations through mutual cooperation. She also disclosed that Kuwait planned to establish a national leadership school, in collaboration with France, for enhancing training and governance activities.

Meanwhile, France on Thursday lavishly praised Kuwait's role in supporting cultural development over the decades and on several levels. This acknowledgement came from the French Prime Minister Bernard Cazeneuve, during an official ceremony which he hosted to mark the inauguration of a new library at the Arab World Institute (IMA) in Paris, which Kuwait helped to refurbish.

The French prime minister added that it was "thanks to the generosity of the State of Kuwait" the IMA library was refitted and underwent an ambitious refurbishment. "I want to tell you how much the investment of your country in the achievement of this library attests also to the quality of our bilateral relations and to the strength of the ties that have been forged over the years," the French Prime Minister told Sheikh Mohammad.  He added that Kuwait's actions in the culture domain would help build bridges between peoples and cultures at a time when some are seeking to erect barriers between nations and populations.