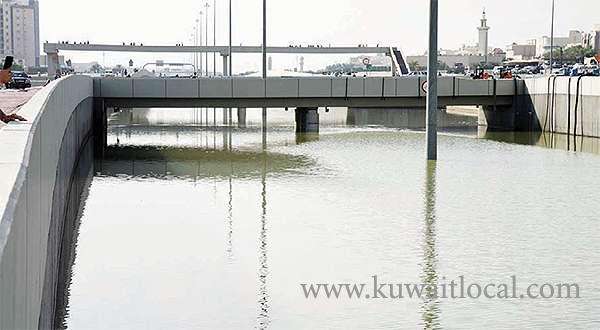 In a press statement, Minister Boushehri said the teams will inspect all the district sectors to determine the damage caused by the downpours, in addition to inspecting the work performed by companies with contracts with the ministry and present a report in one week.

The ministry has been working closely with the Ministry of Public Works to determine all causes of the damage to file a report to the fact finding committee, formed by Minister of Public Works and Minister of State for Municipal Affairs Hussam Al-Roumi.

Minister Boushehri affirmed giving the fact finding committee all the support needed to find any kind of shortcoming, pointing out that any defaulting civil servant would be held accountable.

Complacency
There could not be any complacency in the rights of citizens, and endangering their lives due to lack of competence by the companies that built the district infrastructure, she warns. She has thanked all government institutions that have been working round the clock in the last few days to repair the damage.

Meanwhile, Chairman of the Board of Directors of Kuwait’s General Authority for Road and Land Transport Eng. Saud Al-Naqi announced Sunday the opening of the Manqaf city tunnel heading towards Kuwait City.

In a statement to Kuna, Al-Naqi said that the tunnel was cleaned out and noted that the other side would be opened to road users within two hours time. And in a very important move, Defense teams, in cooperation with Public Works Ministry managed Sunday to contain rainwaters in South Sabahiya area and redirect it away from residential areas, the Defense Ministry announced Sunday.

Forces on Duty, known as “Ghaith”, in cooperation with the ministry’s military facilities engineering department and in coordination with the Public Works Ministry, have resolved the crisis that caused rainwater floods in South Sabahiya area, the ministry said in a press statement.

The forces succeeded in opening the main manhole in the area and placing a concrete block to contain the waters and redirect it away from residential towns, it added.

Further on, Kuwait’s meteorological department said the weather on Monday would be partly cloudy and visibility will improve gradually with variable light to moderate NW wind with speed of 06-28 kmph.

By night, it will be fair with variable light to moderate wind, with speed of 06- 30 kmph and some scattered clouds will appear, it added.