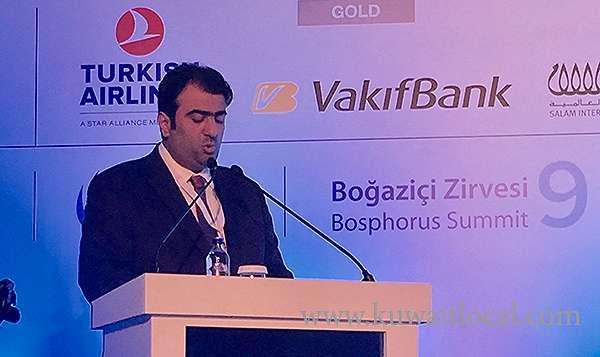 Kuwaiti Minister of Commerce and Industry Khaled Al-Roudhan said on Monday Kuwait had drawn foreign investments valued at USD 2.9 billion. Addressing the 9th Bosphorus Summit, held in Istanbul under the theme: “Sustaining Peace and Development for All”, the minister said three Turkish companies have got licenses for investment in Kuwait, and they are now working in the construction field.

These Turkish companies are carrying out huge and major projects within the framework of Kuwait’s development plan, including a new terminal at Kuwait International Airport, he added. He added that Kuwait has set out an all-out strategy to promote and stimulate economic development, to develop human values and to wipe out obstacles blocking worldwide progress and cooperation.

He pointed to his country’s ongoing efforts to become a commercial and financial hub as part of Kuwait’s 2035 development drive. On Kuwait’s humanitarian efforts, the minister boasted that his country has taken it upon itself to alleviate people’s sufferings and woes in different world regions just out of its humanitarian core principles.

In this context, he highly commended His Highness the Amir Sheikh Sabah Al-Ahmad Al- Jaber Al-Sabah’s great humanitarian efforts, which won him the UN title of the Humanitarian Leader.

Entitled: “Sustaining Peace and Development for All”, the 9th Bosphorus Summit is organized by the International Cooperation Platform (ICP) under the auspices of Turkish President Recep Tayyip Erdogan. Within the scope of the summit, several topics will be discussed, such as trade wars, trade in local currencies, development projects, global peace, and renewable energy, by experts, academics, business-people, and politicians from several countries.