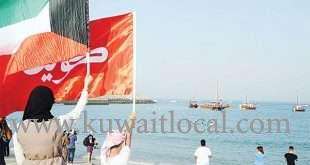 The Fatwa and Legislation Department has become the first government institution to adhere to full Kuwaitization of government with a 100 percent rate, reports Al-Qabas daily.

The Head of the Department, Counselor Salah Al-Masa’ad has issued a decision to terminate the services of all legal foreign researchers and instructed the Civil Service Commission to allocate these jobs for Kuwaitis.

A knowledgeable source said this is done in line with the decision to terminate the services of expatriate employees in the ‘Secretariat’ and others doing normal jobs and then a decision will be taken to replace foreign consultants with Kuwaitis, thus there will be no expatriate staff except for in the safety and security sector.

The source pointed out the selection of Kuwaitis will be done carefully through interviews and not just for the sake of filling the vacant spaces due to the sensitivity of the work of the advisory body.

The source said the department informed the expatriates today (Jan 15), and will be giving them time to pack up their bags as per the law which ranges between one and three months, with the end of service indemnities.

One of the observers commented on the speed of applying the replacement in the Fatwa and Legislation Department and said the Department was supposed to complete replacement by 88 percent but opted for 100 percent.

On the other hand, the Al-Jarida daily said the Health Ministry will sign contracts with global companies to audit the expenditure of overseas health offices. The ministry also discussed Kuwaitization of staffs in these offices very soon.

Efforts exerted to nationalize senior positions in the banking sector have started to bear fruits as the number of Kuwaitis occupying these positions reached 33 percent while expatriates constitute 67 percent of the total number of staff in leadership positions, reports Al-Qabas daily quoting sources.

Sources pointed out that four banks — National Bank of Kuwait, Kuwait Finance House, Warba Bank and Bubyan Bank — are currently headed by Kuwaitis who have proven their efficiency and ability to succeed.

Sources added the Central Bank of Kuwait (CBK) has instructed the banks to seek the assistance of senior expatriate employees in training national manpower to prepare them for shouldering responsibilities later.