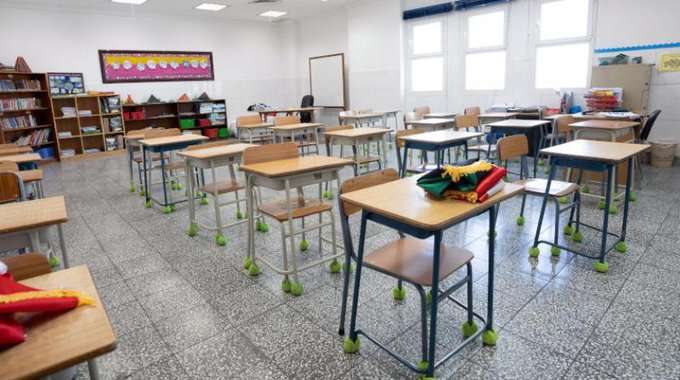 The fate of secondary school students will remain in suspension until the Ministry of Education arrives at a decision as to how to give grades because the members of the education committee rejected the proposals submitted by Ministry of Education during the meeting which was held in the National Assembly and requested that the decision reached by the Ministry be done through a specific mechanism.

The sources indicated that the ministry has postponed the approval of the grading mechanism decision in the secondary stage and its suspension to the second semester and weighing on the possibility of conducting paper tests for the first and second semesters, pointing out that the ministry places its hopes individually on conducting paper tests for students without referring to the Ministry of Health.

The Ministry in this regard can request a meeting with the concerned authorities to determine the extent to which this can be achieved in the coming months, based on its reading of the health situation in the country and discussing all possibilities, and then the Ministry giving its opinion and options without waiting for the zero hour to issue a decision. However, the sources say they are surprised at the absence of any vision to take sound educational decisions since it has become evident that the Ministry is creating more chaos and confusion in the education field the consequences and repercussions will have a adverse effect on the students, their parents and the people working in this field.

The sources criticized what they see as the state of weakness and shallow vision in defining the sound educational approach that the Ministry of Education is supposed to pursue in light of the exceptional circumstances caused by the Corona pandemic, saying the concerned officials must not reconcile with fear when it comes to taking the decision and bearing its consequences and defending it as it represents the opinion of the people who are the closest in understanding and realizing the requirements of the educational reality and its actual needs.

The Assistant Undersecretary for General Education, Osama Al-Sultan, has issued a decision on the distribution of grades for the first semester for all educational levels. The text of the decision stated based on the approval of the Undersecretary of the Ministry of Education, please know and work to start monitoring students’ grades.

Acting Ministry of Education Undersecretary Faisal Al-Maqsid recently issued a decision to change the mid-year vacation in the academic sector, reports Al-Anba daily. The daily obtained a copy of the decision stating that the mid-year vacation will be from Jan 24 to Feb 24; indicating this amendment will be included the academic calendar of public and private educational institutions, religious institutes, special education, adult education and literacy centers. With this decision, the second semester of the current academic year will commence at the beginning of March.

Meanwhile, Head of the Workers Union at the Ministry of Social Affairs Yahya Al-Dousari revealed that he recently discussed with the concerned Civil Service Commission (CSC) officials the disbursement of contamination, risk, pollution and noise allowances in a bid to complete procedures related to the follow up of the demands of workers in the Social Care Sector who did not receive these allowances, reports Al-Anba daily. Speaking to the daily, Al-Dousari disclosed the CSC officials confirmed that in the next few days, they will contact the ministry through eligibility letters for workers who are entitled to the above-mentioned allowances but were excluded in the previous disbursements in various sections of the sector – Juvenile, Elderly and Family Custody.