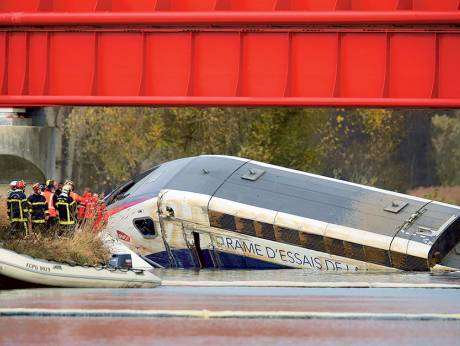 A French high-speed train that derailed on a test run on Saturday, leaving at least 10 dead and 37 injured, had “several children” on board, the rail company said Sunday. “There were several children on board,” a spokesman for France’s state rail company SNCF said, a day after the first fatal accident since TGV trains were introduced more than 30 years ago.

He added however that he was unable to say if any of the children were among those who died in the derailment in Eckwersheim, near the northeastern city of Strasbourg. “On the other hand, there are some among the injured,” he added, but said he couldn’t say if their injuries were serious.

An investigation would establish the number of people on board the train and if there were passengers who were not authorised to be there, he said. SNCF chief Guillaume Pepy also told France Info radio that inquiries would shed light on exactly who the “accompanying people” were and how they came to be on board.

“That’s not a practice that the SNCF recognises,” he said, stressing “a test train is a test train”.

A team of 49 technicians and rail employees were on the train, which was travelling at around 350km/h on a high-speed line as part of testing for the next generation of TGV due to go into service in early 2016, a source close to the inquiry said.

The train ended up in a canal. The accident is thought to have happened “because of excessive speed”, Dominique-Nicolas Jane, a senior official in the Alsace region, said on Saturday. The accident is the first fatal accident since the TGV (“train grande vitesse” or high-speed train) went into service in France in 1981.