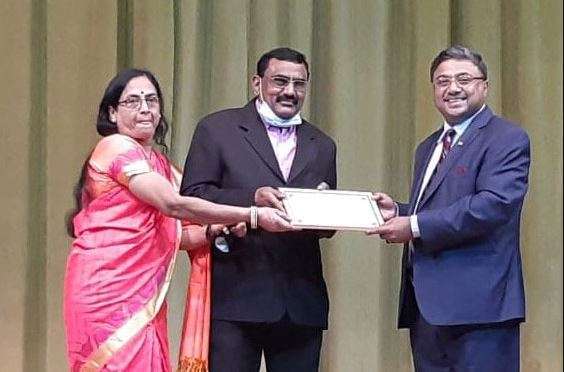 During this event, H.E Indian Ambassador Shri Sibi George presented a Memento to NCM as a mark of Indian Embassy's appreciation for his committed social work for the community. "N.C. Mohandoss is a multifaceted personality, he is journalist, he has his own blog, he is an active member of a community as a social worker and the trust he was able to build in over the years among the community members at all levels is something unprecedented and which needs to be appreciated and remembered," Ambassador said.

N. C. Mohandoss, the Founder of Indian Frontliners (IFL), has pioneered a number of social service activities in Kuwait, especially for the Tamil community. IFL, with a motto – "United to serve United we serve!", had conducted numerous events in Kuwait and published number of books written by N C Mohandoss outlining achievements of Indians world-wide and in Kuwait. These books were released at the annual function by the prominent VIPs from India. So far 23 books were released in Kuwait.

IFL's helping hands have reached out to a wide spectrum of the needy person in society. IFL working directly and through Indian Embassy and other service organizations have provided relief and assistance in the field of Education, Health, Disaster Relief, Old-age care, Orphanage Services, Animal Care & Community welfare etc..

Whether it is at amnesty time or Corona affected pandemic, IFL collaborated with Indian Embassy and other community groups helped teh community in Kuwait at large.

As an author, N. C. Mohandoss has written 200+ novels, 600+ short stories, 23 novelettes, 3000+ articles and 4 TV dramas in Tamil. He has written on social topics and has to his credit more than 100 books published which have appeared in all leading Tamil magazines and newspapers. His writings are dedicated for the students of Annamalai University, Tamilnadu for research to obtain PhD. NCM attributes his inspiration to "Thuglak" Cho, "Saavi", Guru Dinamalar Mr. Ramesh and the constant support and guidance of his friend Mr. Manohar.

Born in an agricultural family, NCM hails from a remote village called Nambukuruchy in Tiruchi District, Tamil Nadu. From 1994 he is working for Kuwait National Petroleum Company. He feels a sense of pride in owning that his success is due to the support, of his wife Arulmozhi, and their daughter Vinu, who correctly read his mind and reflects his ambitions and aspirations in every way. He had earlier received a Gold Medal in 2013 by Dr. A.P.J. Kalam for his community services. Mohandoss dedicated all the honour he received to IFL team and to well wishers who were regularly supporting his community services.